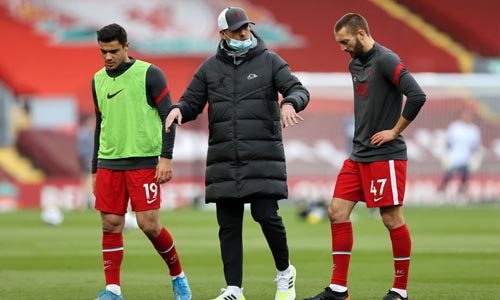 Liverpool must produce a “perfect performance” to overcome a 3-1 first-leg deficit against Real Madrid today and reach the Champions League semi-finals, manager Jurgen Klopp said. A difficult season for the English champions will end without a trophy should they fail to pull off a fightback against the 13-time European Cup winners today.

“This Real Madrid team has some of the greatest talent playing football in the world today.

This isn’t a surprise – it’s what Real Madrid do. So to beat a side like this you must always strive for the perfect performance,” Klopp said in remarks published on the Liverpool website yesterday. “But what we will not lose sight of is how good we are, the talent we have, the magic in our dressing room and the character required to make special moments happen. “We have the entire package at Liverpool.”

One part of the package missing from previous glory European nights at Anfield will be the crowd because of ongoing coronavirus restrictions.

Liverpool famously overcame a 3-0 first-leg deficit to beat Barcelona 4-0 in the second leg of their Champions League semi-final on route to winning the competition for the sixth time in 2019.

But, with no fans in the stands, Klopp has played down comparisons with that clash or the fightback from 3-1 down on the night, to score three times in the last 24 minutes and beat Borussia Dortmund 4-3 and advance 5-4 on aggregate in the Europa League five years ago.

“It is an indisputable truth that a full stadium would have been significant for us,” added Klopp. “When I think back to the many special nights we have had here, I usually describe them with the word ‘together’. That is because those nights were about the collective power of this club.

Supporters and players coming together to produce memories that last a lifetime. “My job – and the job of the boys – is to channel your energy despite the forced distance.

We know it’s still there, therefore we can still use it. It’s more of a challenge, of course, but since when did we ever do anything the easy way?” Left-back Andy Robertson said the players have a responsibility to create the atmosphere themselves. “The Barcelona game, that wouldn’t be possible without the fans.

The fans made us feel 10 feet tall,” said the Scotland captain. “Walking out to 55,000 other people who believed, gave you that extra 10 percent. “We need to try and create that atmosphere in the changing room before we go out. We’ve got to have no regrets.”