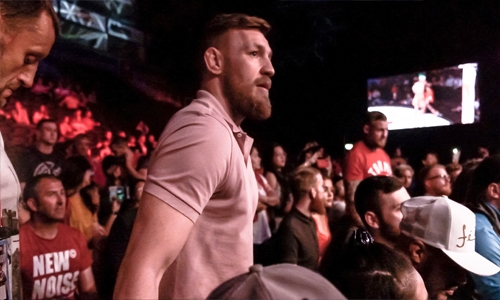 Conor “The Notorious” McGregor congratulates the founder of BRAVE Combat Federation, His Highness Shaikh Khalid bin Hamad Al Khalifa, on BRAVE CF 50 and the efforts that he has made to revolutionize mixed martial arts around the world.

BRAVE CF 50 was a celebration of BRAVE CF being the only mixed martial arts promotion to visit 21 countries, 5 continents, in its first 50 events making it the only truly global MMA promotion. In a video message to HH Shaikh Khalid, McGregor sent his remarks on the success of the promotion.

“Huge congratulations to you for your 50th MMA show, absolutely brilliant. I want to say thank you personally for creating these events for our fighters, the SPG fighters, Irish fighters, and fighters all over the world,” says McGregor.

BRAVE CF has made massive success since its establishment on September 23rd 2016, and is currently the fastest growing in the world, largest sports media property in the Middle East, and has acquired the largest MMA market share in Asia with with operations developing in Indonesia, Philippines, Kazakhstan, Kyrgyzstan, India, Pakistan and the Middle East, covering South Asia, West Asia, Central Asia and Southeast Asia.

McGregor also touched on the difficulty of the MMA industry for athletes, and how the vision of HH Shaikh Khalid has been crucial to the success of many professional mixed martial artists across the globe.

“It’s such a tough business and to have someone like yourself so invested in the sport is crucial for us and I want to say thank you for that,” says McGregor. “So, a huge congratulations to you HH Shaikh Khalid on your 50th MMA show. Let’s go BRAVE CF.”