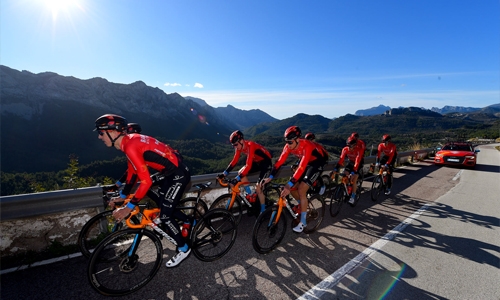 Team Bahrain Victorious, founded by His Majesty the King’s Humanitarian Works and Youth Affairs representative and Supreme Council for Youth and Sports chairman His Highness Shaikh Nasser bin Hamad Al Khalifa, announced yesterday their seven-member squad that will be competing in the 76th edition of Omloop Het Nieuwsblad in Belgium on Saturday.

The exciting race from Ghent to the finish in Ninove is the first UCI WorldTour race of the season to be held on European soil.

Then, on Sunday, the squad will participate in the 73rd edition of Kuurne-BrusselsKuurne.

Together, the two Belgian races are known as the Opening Weekend marking the start of Classics season in Europe.

“The coming races in Belgium are going to be the first real test on cobbles, and that needs a lot of commitment from riders and the whole team,” he said. “It’s hard work, and we know that we’re going to face many young motivated neo pros and rising talent on home soil— Belgians who are really hard to beat. “We are confident with the team’s depth.

Sonny Colbrelli for a sprint finish, a super motivated Dylan Teuns and an experienced Heinrich Haussler. It’s also an exciting moment for Mark Padun, who never raced in Belgium.

I’m excited about it. We are here to race and really go out there, ride offensive and be fully committed.” Colbrelli is looking forward to his first race of the season.

He commented: “Here we go with the first race of this 2021 season.

It’s the season Classics opening in Belgium, and for this reason, it’s very important for me to have a good start. I must admit it’s not a soft start to the racing season. “Still, I will be coming to the race after an excellent block of altitude training with the team, and I’m also very motivated. We have a perfect lineup to do well at the start of the Classics season.”

Teuns is feeling good ahead of the race. He said: “I’m really motivated for the opening classics of the year.

I came good out of Tour de la Provence. I had a good week of training at home, and now I’m all set to race on Saturday.”