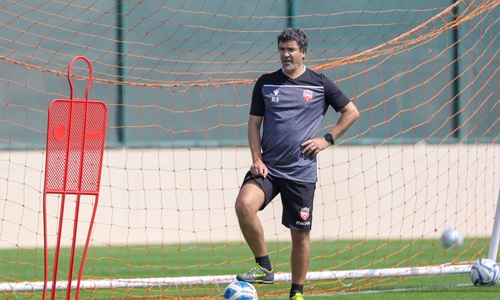 Bahrain head coach Helio Sousa says that the national team now commands a greater level of respect from their opponents as compared to years past, and must now continue to build on this recent progress. “I think our opponents see us and have more respect than what they had before,” Sousa tells TDT. “Now I think they see us with different eyes, with different respect.

They like to play against us and they know they will have many difficulties to beat us.” Sousa is currently preparing the national team for their upcoming games this year, which include their three remaining matches in joint-qualifying for the FIFA World Cup 2022 and AFC Asian Cup 2023.

Bahrain is set to face Cambodia, Iran and Hong Kong this June as they hope to finish as winners of Group C and earn an automatic berth in the next round of World Cup qualification, or at least be one of four best runners-up to advance.

At the same time, they would secure their places in the Asian Cup. Sousa says that the Bahrainis must come out and be at their best from their very first contest, as there is little room for error in their last qualifiers. “If we don’t conquer what we want from the first game that will be against Cambodia, the rest will be difficult to achieve,” he explains. “We must focus on playing inside of our philosophy, the way that we want, go again to the pitch to make it happen, and try to get one more victory. “We’ll be more prepared for when the qualifier games will start again.

The first one will be the most important.

After that, we start thinking about the second game.” Bahrain is set to play two international friendly matches next month in preparation for the qualifiers, first against Syria on March 25 and then against Jordan on March 30.

Both games will take place at home. Sousa stressed on the importance of Bahrain’s players having a fighting spirit every time they take to the pitch, especially if things don’t immediately go their way. “If anything happens that goes against our idea, our objectives, we must keep fighting, and we must do that in the game; not after and feel sorry about it,” says the Portuguese tactician. “We are showing that capacity.

We will for sure be prepared for all, but it’s football and we will be playing against the most important teams from this part of the world. We are fighting with them but we want to conquer their space.” Sousa added that dropping points would not make things impossible in their qualification bid, but it will surely make things more difficult. “It will not be finished, we will fight and do all to get nine points in the three games that we will play, but for sure if you have a mistake in each game, it will bring more problems for us to achieve our goals,” he said. Bahrain’s national team are currently in a week-long local training gathering, which continues until Saturday.

It is the first time they have come together in 2021.