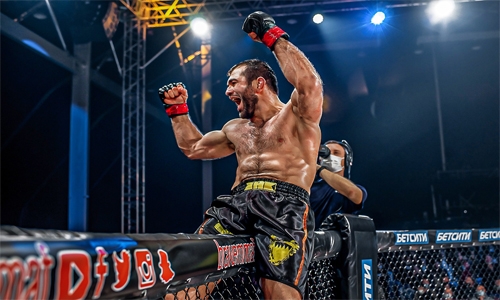 BRAVE Combat Federation broke new ground last Saturday as the fastest-growing organization in the world hosted an event for the first time in Russia.

In association with Krepost Selection, BRAVE CF 46 was a massive success, showcasing top fighters from the region competing in a global platform with several huge storylines coming out of the show.

Russia became the 21st country to be the host of a BRAVE CF show worldwide, and the return of fans in the arena made the night an unforgettable one for all fighters involved in the card. Here are the biggest talking points of BRAVE CF 46:

Eldar Eldarov: the best Super Lightweight in the world

Eldar Eldarov came in at BRAVE CF 46 with a lot to prove. Away from competition since April of 2019, he saw the competition for a title shot at his weight class rise up, with the likes of Luan Santiago, Benoit St. Denis, and Issa Isakov all ready to challenge the champ upon his return. However, the chosen adversary for Eldarov was top striker Leonardo Mafra, who had shown a very well-rounded mixed martial arts game in his last fight. Eldar had a lot of pressure leading up to BRAVE CF 46, as he was the main event and billed as the biggest star. It was a homecoming party for the champ who now also represents Bahrain and lives in the Kingdom full-time. However, Eldarov handled the expectations with ease, having a dominant performance, and reminding the world why he is the best Super Lightweight in the game. Up next? Most likely a date with one of the three aforementioned contenders.

Flyweight Tournament gets an exciting addition

BRAVE Combat Federation is putting together the biggest Flyweight tournament in the history of mixed martial arts, with the likes of Jose Torres, Zach Makovsky, Dustin Ortiz, and Velimurad Alkhasov, the winner will be crowned the first-ever BRAVE CF Flyweight champion of the world. And you can add veteran Ali Bagautinov as one of the contestants for the big prize. Bagautinov made his BRAVE CF debut in the co-main event of BRAVE CF 46 and dominated young, hungry Oleg Lichkovakha, albeit with some scary moments - especially in the second round when Oleg got Ali’s back momentarily before the two-time sambo world champion reversed the position. The unanimous decision win in favour of Bagautinov means he will now enter the tournament, and is potentially three fights away from winning the biggest prize of his storied mixed martial arts career.

Roman Bogatov began his descent to Featherweight in his first fight with BRAVE Combat Federation. The Russian star was eager to make up for a disappointing loss in his latest outing but had to dig deep to get the win against fellow newcomer Nurzhan Akishev. The two men put on great action throughout three rounds, but in the end, Bogatov was too good for Akishev. The new Featherweight addition went as far as saying that Kazakhstan’s Akishev was the hardest opponent of his career - actually harder than the one that beat him in his last outing before BRAVE CF. Now he has thrown his name into the hat of next possible contenders for the Featherweight world title, currently vacant. If Bogatov can maintain that level of performance, then the sky’s the limit for the 29-year-old.

Murtaza Talha: the next superstar

In the last few months, BRAVE Combat Federation has firmly established itself as a hotbed for new superstars for the sport. And the latest one might be the best yet. Murtaza Talha handled his second professional fight with even more ferociousness, ending Dmitriy Krivulets’ night early in the first round. It was the first TKO victory for the young Bahraini, who has conquered the amateur world with two world titles at IMMAF, the number one rank at Light Heavyweight, and the number six pound-for-pound spot at the International MMA Federation’s list. Now he’s beginning his descent to Middleweight, where he hopes to continue his domination towards an eventual title shot. The next big star of mixed martial arts is ready for higher flights.