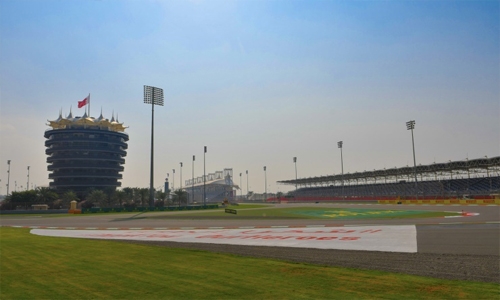 Formula 1 action is back at Bahrain International Circuit (BIC) on Friday, December 4, with the F1 Rolex Sakhir Grand Prix, the second event of the Kingdom’s first-ever F1 double-header.

The meeting is the 16th and penultimate round of the 2020 FIA F1 World Championship and it will be the first time that racing will be held along BIC’s 3.543-kilometre Outer Circuit, which is a different track layout from last weekend’s F1 Gulf Air Bahrain Grand Prix. It will therefore offer an all-new challenge for the drivers and an additional racing spectacle for motorsport fans around the world.

F1 qualifying lap times along the Outer Circuit are predicted to be under 55 seconds, while laps during the Grand Prix are expected to be below 60 seconds.

Also set to hit the track on all three days of the event is the FIA Formula 2 Championship and the Porsche Sprint Challenge Middle East. F2 will be holding the final round of its 2020 season and will therefore be crowning its newest champions in Bahrain, while the Porsche Sprint Challenge ME will be staging the second round of its 2020/2021 campaign.

Friday’s schedule will be headlined by the two 90-minute F1 Practice sessions, scheduled for 4.30pm and 8.30pm starts.

F2 will hold a Practice at 3.05pm, to be followed by Qualifying at 6.45pm, while the Porsche Sprint Challenge ME will be on track twice for Practices at 1.55pm and 10.25pm.

The F1 field sees a few changes. Williams driver George Russell has been released by his team for this weekend to be able to substitute for seven-time F1 world champion Lewis Hamilton at Mercedes. F2 driver and Williams reserve Jack Aitken has thus gotten the call up to compete in place of Russell for Williams. Furthermore, Pietro Fittipaldi will be racing in place of Romain Grosjean at Haas.

Mercedes had announced during the week that Hamilton had tested positive for COVID-19 and has gone into self-isolation, making him unable to race in the Rolex Sakhir Grand Prix. Grosjean, meanwhile, was involved in a horrifying crash last Sunday, requiring him to spend three nights in the hospital for treatment. He has since been discharged but his return to racing is still pending.

Russell will be partnering Valtteri Bottas for world champions Mercedes, Aitken will compete next to Nicholas Latifi at Williams, while Fittipaldi will race alongside Kevin Magnussen at Haas. Both Aitken and Fittipaldi are making their debuts in an F1 Grand Prix.

The rest of the F1 grid remains unchanged for the Rolex Sakhir Grand Prix, with Max Verstappen and Alexander Albon driving for Red Bull Racing, Lando Norris and Carlos Sainz for McLaren, Daniel Ricciardo and Esteban Ocon for Renault, Sergio Perez and Lance Stroll for Racing Point, Charles Leclerc and Sebastian Vettel for Ferrari, Kimi Raikkonen and Antonio Giovinazzi for Alfa Romeo, and Pierre Gasly and Daniil Kvyat for AlphaTauri.

BIC will once again be welcoming Bahrain’s heroes for the Grand Prix on Sunday. Just as it had done for last week’s Gulf Air Bahrain Grand Prix, the circuit has invited a second group of the Kingdom’s frontline health workers, first responders and their immediately family members to enjoy the F1 action, in line with the directives of His Royal Highness Prince Salman bin Hamad Al Khalifa, Crown Prince and Prime Minister.

The initiative is in appreciation of the health workers’ tireless efforts and sacrifices in Bahrain’s national response to COVID-19, and it is being held under the theme “#ThankYou_OurHeroes”.

The F1 Rolex Sakhir Grand Prix weekend will be taking place with all precautionary guidelines in place issued by the Ministry of Youth and Sports Affairs and the Ministry of Health, as well as those set by the FIA.