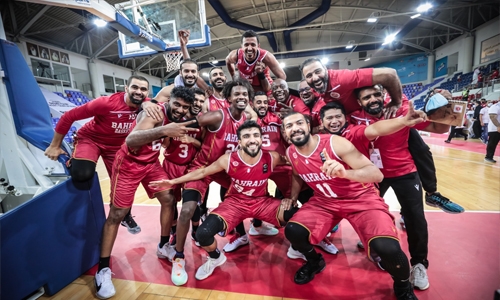 Bahrain’s senior men’s national basketball has doubled their reasons to celebrate following their victories the past few days against Iraq and India.

Not only have they booked their tickets to the FIBA Asia Cup 2021, which will be their first appearance in the continental tournament since 2013 and ninth overall, but they have also secured their place in the qualification competition for the FIBA World Cup 2023.

This was confirmed yesterday by the Bahrain Basketball Association, who said that the World Cup qualifiers would be played over a period of 15 months, beginning in November of next year.

Bahrain will be one of 80 countries from around the world competing for 32 spots in basketball’s showcase tournament, which will be jointly hosted by Indonesia, Japan and the Philippines. The World Cup field will include eight teams from Asia and Oceania, 12 from Europe, seven from the Americas, and five from Africa.

Japan and the Philippines have already secured their seats as hosts, while co-host Indonesia must finish amongst the top eight teams in next year’s FIBA Asia Cup to gain qualification.

Meanwhile, the FIBA Asia Cup 2021 qualifiers held in Bahrain over the past few days wrapped up last night with the Philip- pines routing Thailand 93-69 in the day’s lone fixture.

The Filipinos led the entire way and went ahead by as many as 28 points.

Javier Gomez De Liano top scored for the victors with 19, while Juan Gomez De Liano added 14 and Dwight Ramos 13. Chanatip Jakrawan had 34 to pace the Thais in the loss. With the result, the Philippines conclude their campaign in Bahrain with two wins from as many games, while the Thais lost all three of their contests.