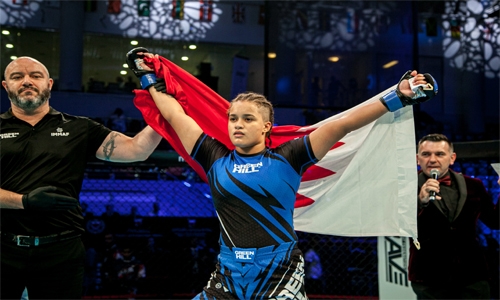 Considered the biggest powerhouse in MMA around the world, the Bahrain national team, currently ranked number one in the IMMAF national rankings, has consistently expanded its sphere of influence and positive results.

The first IMMAF World medalist representing the Kingdom of Bahrain in a female division is now recognized as one of the top athletes globally, being nominated to the most important award offered by the International Mixed Martial Arts Federation: the 2020 IMMAF Amateur MMA Awards

Submission specialist Sabrina de Sousa made waves during her world championship debut in 2019 when she won the title of the tournament held in Bahrain with four consecutive submission victories.

In the first round Sabrina quickly kneebar and in the three subsequent matches, including the title fight, she submitted her opponents with slick armbars, showing her superiority in the Featherweight division.

Sousa’s achievement was just another example of the Kingdom of Bahrain excellence when it comes to the sport of Mixed Martial Arts and the fruitful results of His Highness Sheikh Khaled bin Hamad Al Khalifa’s investment in the development of MMA through KHK MMA, the Bahrain MMA Federation, and BRAVE Combat Federation.

Given the special circumstances, the IMMAF Amateur MMA Awards will be held virtually, through video conference, but the votes in the athlete's categories, such as Sabrina de Sousa from Bahrain’s one, will be cast by all member federations across the globe.