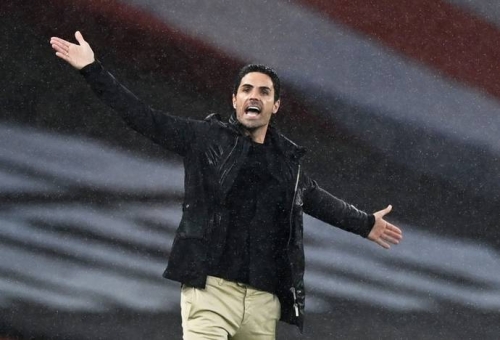 Premier League clubs have an obligation to protect those further down the English soccer pyramid, Arsenal manager Mikel Arteta said on Thursday, the day after top-flight clubs voted against Project 'Big Picture.'

Touted by the American owners of Liverpool and Manchester United, the plan called for the Premier League's six biggest clubs, plus three long-term members, to have “special voting rights” that would effectively put them in command of the world's most commercially successful league.

Many Football League (EFL) clubs welcomed the project that promised a 250 million pounds ($322.80 million) rescue fund and Arteta says that whatever the rights and wrongs of the proposals, lower league clubs should be protected.
“I think we have to protect the lower leagues as well, this is our obligation,” Arteta told reporters ahead of his side's trip to his old club Manchester City on Saturday.

“We want to produce grassroots and opportunities for everybody in this industry. I think it's fair to assess the situation and find the best possible way to achieve that. This is our responsibility as well.”

Arteta said he believed unity was vital in any decisions regarding a re-structuring of the Premier League.

“I think that's a massive strength so as much as we can, we can maintain that unity and sustain our way of doing things,” Arteta said. “I think that's very valuable and the image that we project to the outside world is really, really strong.

“I hope that we can maintain that.”

While Project Big Picture has dominated the agenda this week, Arteta's main concern is Arsenal's clash with City which has begun the season in stuttering fashion, taking four points from its first three games.

“They are still producing incredible numbers in everything that they are doing,” Arteta said. “In my opinion, they have been really unlucky with some of the results they got because they should have put games to bed very early in those games, and then the level of efficiency of the opponents, when they had half-chances, have punished them a lot.

“But I haven't seen any decrease in the level of the way they are playing or in what they are producing game by game.”

Arsenal could hand a debut to new signing Thomas Partey after his arrival from Atletico Madrid.

“Today he will have his first training session, so everything has to come quickly for him,” Arteta said. “We knew that before we signed him that he is fit, he is very willing to start playing. We will see how he goes in the next few days