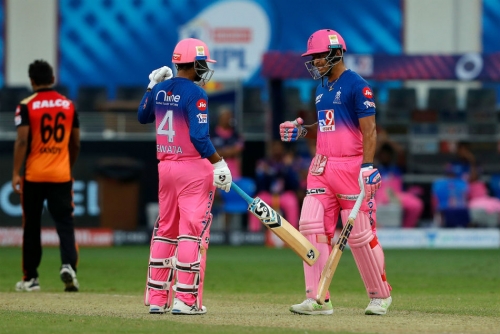 Rahul Tewatia and Riyan Parag batted superbly in the death overs as Rajasthan Royals ended its four-match losing streak in the Indian Premier League with a five-wicket victory against Sunrisers Hyderabad. Tewatia smashed an unbeaten 45 runs off 28 balls and 18-year-old Parag hit fast bowler Khaleel Ahmed for a six to complete the victory.

Parag scored 42 off 26 as Rajasthan reached 163-5 with only one ball to spare. Manish Pandey (54) and captain David Warner (48) had earlier anchored Hyderabad to 158-4 after Warner won the toss and chose to bat. Kane Williamson (22 not out) lifted Hyderabad’s total by smashing two sixes against Jofra Archer (1-25) in the 19th over and Jaydev Unadkat (1-31) went for 16 in the last over. But it was Tewatia who took the game away from Hyderabad. With his team needing 36 off 18 balls, Tewatia repeated the aggression he had shown at Sharjah where he smashed Kings XI Punjab fast bowler Sheldon Cottrell for five sixes in an over.

“The wickets were falling so I just wanted to hold one end up and wait for the boundary balls,” Tewatia said. “I told Riyan that the wicket was playing slow and the deeper we take it, the better our chances, even if we needed 50 off the last 4 (overs) because we have the shots.” Rajasthan’s Ben Stokes had a forgettable first IPL game this season after the England allrounder ended his quarantine on Saturday. Stokes was bowled by Khaleel Ahmed (2- 37) for five runs. In another match, Mumbai Indias cruised to a five-wicket win over Delhi Capitals in a thrilling clash at the Sheikh Zayed Stadium in Abu Dhabi. With this win, MI now has overtaken DC as the league leaders on the points table.