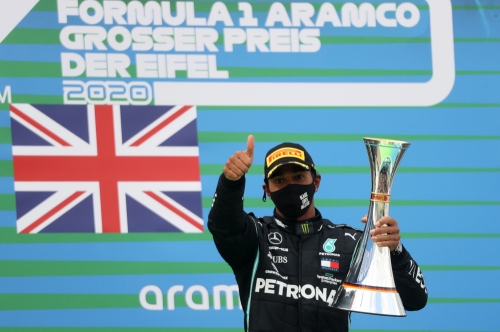 Lewis Hamilton controlled his emotions yesterday as he equalled Michael Schumacher’s record of 91 F1 wins with a measured triumph and thoughtful homage at the Eifel Grand Prix. After completing his seventh win of the season, Hamilton was surprised to be greeted Mick Schumacher, the son of the German seven-time champion. Mick presented a red helmet from his father’s career collection to Hamilton.

“Congratulations on a great achievement,” said Schumacher, a rising star who is leading the F2 series. Clearly moved, Hamilton struggled for words. “Thank you so much,” he said. “It’s such an honour. I don’t know what to say. When you grow up watching someone and idolising them...” “Seeing his dominance for so long, I don’t think I imagined I would be near him in terms of records so it’s an incredible honour. “As I came in the pit lane, that was only when I realised I had equalled the record.

“I hadn’t computed it when I crossed the line –- and I couldn’t have done this without this incredible team pushing behind me. So, a big thank you -- and huge respect to Michael.” Taking full advantage of teammate and pole-sitter Valtteri Bottas’ early retirement with engine problems, the runaway series leader and six-time champion drove a well-judged race to claim his landmark victory. On a circuit where Schumacher, a seven-time champion, won five times, Hamilton came home 4.5 seconds ahead of Red Bull’s Max Verstappen to take his second Nurburgring victory, the other for McLaren in 2011.

Daniel Ricciardo was third for Renault. Fastest lap “I just tried to follow Lewis, but the Mercedes was just a little too fast for us,” said Verstappen. “But I did manage to grab fastest lap for the extra point.” Bottas’ bad luck almost certainly ended his own title bid as Hamilton moved 69 points clear in the drivers’ championship. Hamilton was quick to warn of Red Bull’s threat.

“Red Bull have a great car and Max is so impressive,” he said. “It’s going to be close to the end of the season and into the next one. The closest racing between us is coming over the next 12 months.” Assessing his record-equalling achievement, Hamilton added: “Ninety-one wins! Phew, it never gets any easier. It’s almost like it’s getting harder than it was for my first win in Montreal. It’s more demanding physically, in a different way and mentally demanding too, in a different way.

This has been just as hard, if not harder, than my first Grand Prix win.” Ricciardo’s podium success won him a bet with Renault team boss Cyril Abiteboul who must now get a tattoo prescribed by the Australian. “Yes, that’s going to happen,” Ricciardo laughed. “It will probably be something to do with me, but with a German flavour as this is the place where we did it.”