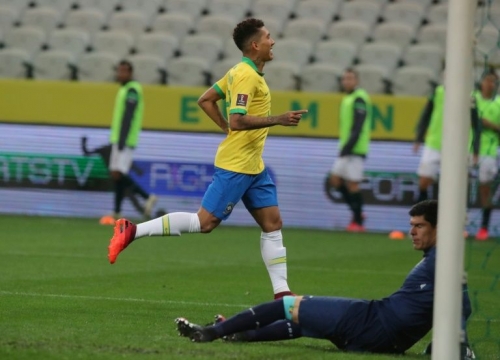 Liverpool striker Roberto Firmino scored a brace as Brazil romped to a 5-0 victory over Bolivia in their opening 2022 World Cup qualifier. B a r c e l o n a p l a y m a k e r Philippe Coutinho and Paris Saint-Germain defender Marquinhos also got on the scoresheet while star forward Neymar set up two goals in a totally one-sided encounter that sent Brazil top of the South American qualifying table. In a Corinthians Arena deserted due to Covid-19 restrictions, Bolivia showed almost no ambition as Brazil dominated throughout, with PSG’s Neymar starting after overcoming a back problem. Inside the first minute, winger Everton volleyed wide from inside the six-yard box and three minutes later his cross was headed off-target by Marquinhos from a similar position.

Bolivia couldn’t get out of their half, or on the ball, as Coutinho and Everton created a slew of chances down Brazil’s left. The pressure told on 16 minutes as Marquinhos headed home from an identical position to his ear-lier chance as full-back Danilo swung over a cross from the right following a short corner. Even a first half downpour couldn’t dampen Brazil’s thrust as Coutinho forced a diving one-handed save from goalkeeper Carlos Lampe with a deflected shot.