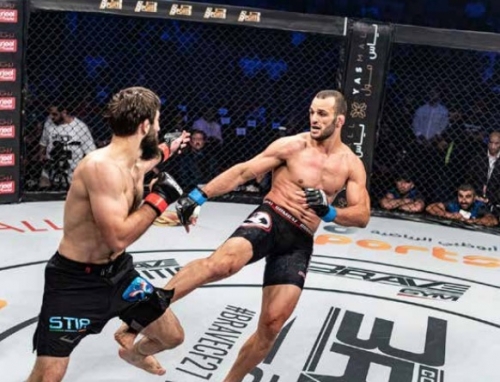 Widely considered as the best Arab MMA fighter ever, Jarrah Al-Silawi is the current, undisputed BRAVE CF Welterweight world champion. However, ‘’The Jordanian Lion’’ is ready to test the waters at Middleweight and admits a clash with Mohammad Fakhreddine would be interesting down the line.

Al-Silawi has fought the current BRAVE CF Middleweight world champion twice, earning a submission victory and falling to a split decision loss in the past. As he gets ready for the main event clash at BRAVE CF 43 in his first Middleweight bout against Melvin van Suijdam, from the Netherlands, Jarrah is hopeful that he can become a force in yet another division. ‘’I can fight at Welterweight or Middleweight.

I’m naturally heavier so it won’t be an issue to fight at Middleweight, there’s no difference. I will defeat anyone at any weight. I’m ready for anyone, there’s not a single fighter in the world that I can’t beat and Fakhreddine is included in that. This is a sport and I’m a very competitive person so you never know. Anyone that comes across me, I’ll be ready to face them’’.

Al-Silawi is coming off a career-defining win as he stopped Abdoul Abdouraguimov to reclaim his world title at BRAVE CF 27, last year. He is the first man to beat Abdoul, who had earned the belt by beating Jarrah in their first contest at BRAVE CF 23, in a razor-thin split decision.

Fakhreddine, on the other hand, made history two weeks ago when he defeated Daniel Gaucho to become the latest Middleweight world champion. Also a legendary figure in the Arab MMA world, ‘’The Latest’’ moved up in weight recently after spending the majority of his career at Welterweight. If Al-Silawi beats van Suijdam, a third epic clash between two of the Middle East’s finest could very well become a question of when instead of if.