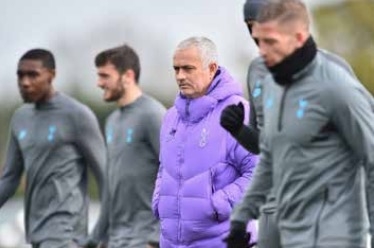 The hectic week is topped off by a trip to Manchester United, another of the Portuguese manager’s former clubs, for a Premier League clash on Sunday. Mourinho said he would like to mount a challenge for the League Cup but the added financial value of reaching the Europa League group stage meant that competition had to take precedence.

“I think you can imagine that with a game on Thursday, that decides a very important thing for us -- I think the EFL (English Football League) made a decision for us,” said the Spurs boss. “They didn’t even create a problem -- they made a decision for us. So that’s the decision.” Spurs lost Son Heung-min to a hamstring injury at half-time of the 1-1 draw with Newcastle on Sunday.

South Korea forward had already hit the woodwork twice after scoring four goals in the previous Premier League outing at Southampton. Mourinho believes Son’s setback will be the first of a number of injury problems his side will have to overcome due to their fixture congestion.