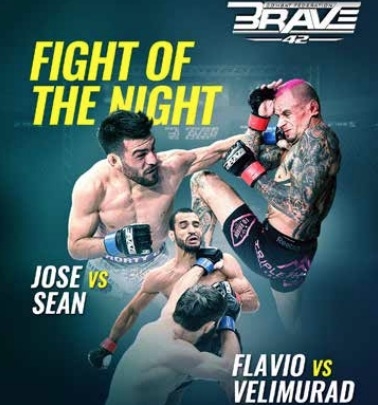 Ahead of the Kombat Kingdom finale, at BRAVE CF 43, the fastest-growing MMA organization in the world has released the winners of the Fight of the Night honors for its second installment at the series, which took place last week at BRAVE CF 42.

Usually, one bout gets the prize, but both BRAVE CF The flyweight tournament quarter-finals were so exciting that officials decided to award both bouts and the four athletes with the award. In the first quarter-final, the co-main event of BRAVE CF 42, Velimurad Alkhasov recovered from his first professional loss by edging Flavio Queiroz via unanimous decision.

The affair was full of excitement for the fans as both men went for the kill from the opening bell and threw everything into their strikes, elevating the level of entertainment. And that level was maintained throughout the main event as Jose Torres and Sean Santella put on a highly-exciting battle for the right to advance to the semifinals.

After dominating the ground exchanges in the first two rounds, Santella went on the retreat for the third round as Jose tried to score a stoppage. In the end, they fought to a draw and will rematch soon for a spot in the final four of the greatest tournament of 2020. Meanwhile, Velimurad joins Zach Makovsky in the semifinals as both men are scheduled to face each other in a date to be announced.

Alkhasov will have the chance to avenge his only the professional loss which took place at the hands of Makovsky at BRAVE CF 34. The other tournament quarter-final bout will take place in the near future as well with Dustin Ortiz waiting on a new opponent after Marcel Adur was forced to pull out of the tournament due to a shoulder injury.