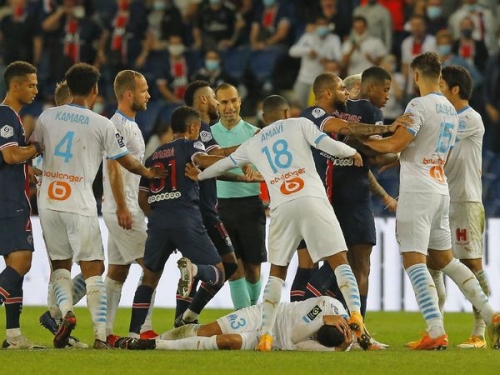 Paris Saint-Germain (PSG) superstar Neymar was one of the five players to receive a red card following an ugly brawl in their Ligue 1 clash against arch-rivals Marseille on Monday. Marseille defeated the reigning French champions 1-0 with the help of a decisive goal from Florian Thauvin in the 31st minute.

Tempers flared between the players from both sides on the pitch during the stoppage time after a clash between Marseille's Dario Benedetto and PSG midfielder Leandro Paredes following a challenge. Benedetto was seen in pain as he went on the ground instantly after the challenge from Paredes before stars from both sides were involved in an ugly brawl.

Neymar was spotted punching Alvaro Gonzalez of Marseille as he became one of the five players to be sent off. Paredes, Neymar, and Layvin Kurzawa were three players sent off from PSG while Jordan Amavi and Dario Benedetto of Marseille also saw reds. PSG was reduced to eight men and failed to avoid their first derby defeat against Marseille since November 2011.

Neymar was caught punching on the back of Gonzalez's head during the VAR check by the referee. After receiving his marching orders, the Brazilian forward was seen claiming racial abuse during the brawl. Neymar told the fourth official that a racial slur was thrown at him before leaving the pitch angry.