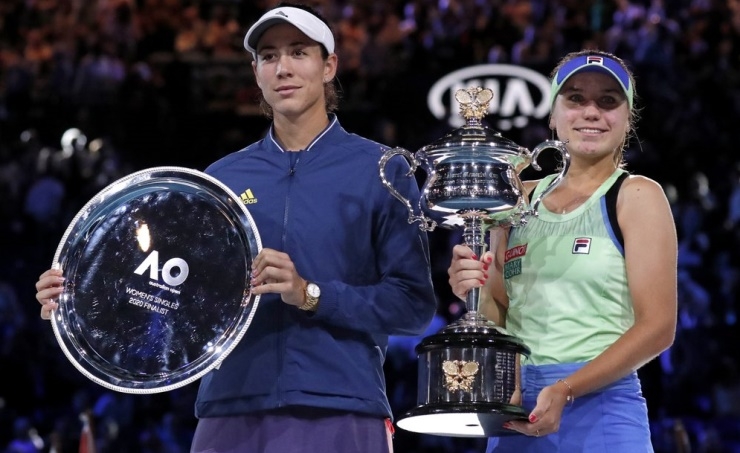 Back in 1987, 11 years before new Australian Open champion Sofia Kenin was born, her parents left Moscow for New York City, eager to escape the Soviet Union and live in the United States because, as her father, Alex, put it: “You want to see the world. You want a better future for your kids.”

Alex took English classes and attended computer school during the day; he drove for a car service at night, straining to understand the dispatcher’s radioed instructions.

“It was very tough,” he says now, “but it’s amazing the things you do when you need to survive.”

Just before Sofia was born, the family briefly returned to Russia so Grandma and other relatives could help with the baby. A few months later, the Kenins went back to New York. Eventually, they settled in Pembroke Pines, Florida, and it was in the driveway of their home there that Sofia, at age three and a half, found her calling, the Associated Press reported.

“I wasn’t into any other toys. I always liked to play with balls and with a racket. So my dad said, ‘Let’s go try it and play.’ Obviously I had great hand-eye coordination. I saw I was really different than other players,” she said, a Champagne flute an arm’s length away as she spoke with a small group of reporters after Saturday had turned to Sunday at Melbourne Park. “And people said, ‘You know she’s really special. Something about her’ ... And look where I am.”

Indeed, look at where, and who, she is: owner of a Grand Slam trophy and expected to be No. 7 — the highest U.S. woman currently — when the WTA rankings are released Monday.

Kenin won the last four games of the final at Melbourne Park with some gutsy play at the most crucial moments, beating two-time major winner Garbiñe Muguruza 4-6, 6-2, and 6-2.

One key sequence decided the outcome.

Kenin faced three break points while serving at 2-all, love-40 in the third set. All she did was conjure up an ace and four point-ending groundstrokes on exchanges that all lasted 11 shots or more.

“She pulled out something unbelievable,” said Alex Kenin, who is his daughter’s coach and calls her “Sonya,” the Russian nickname for Sofia.

In all, Kenin converted five of six break points and erased 10 of Muguruza’s 12.

“Especially in the important moments, I think,” Muguruza said, “she came out with winners.”

According to The AP, Muguruza said she thought Kenin handled the emotions of a major final debut well and didn’t seem to show any jitters. Alex Kenin, though, said he could tell earlier in the day his child was nervous because he saw “tears in her eyes” and she was “trying to hold it back.”

The victory made Kenin the youngest Australian Open champion since 2008, when Maria Sharapova — someone else with Russian roots whose game was grown on the courts of Florida — was 20.

Kenin also will be the youngest American to make her top-10 rankings debut since Serena Williams was 20 in 2002.

It was a win over Williams in the third round of the 2019 French Open, Kenin’s deepest run at a Grand Slam tournament until this week, that helped provide a boost that keeps propelling her forward.

She won her first three tour-level titles last season and cracked the top 20.

This, though, is whole new territory.

Kenin might have been overlooked by some before, when younger Americans such as 15-year-old Coco Gauff and 18-year-old Amanda Anisimova were making deep runs at majors and gaining all the attention.

But other players knew what Kenin could do.

And so, certainly, did she. She proved it to the world by coming back from a set down to eliminate Gauff in the fourth round this week; by erasing a total of four set points while getting past current No. 1 and reigning French Open champion Ash Barty in the semifinals; by ignoring that she was “absolutely devastated” after losing the opening set against Muguruza, a former No. 1 who won titles at Roland Garros in 2016 and Wimbledon in 2017.

Her forehands and backhands are reliable, her drop shots and lobs are terrific, her ball-retrieval is top-class.

But what does Kenin consider her best attribute on a tennis court?

She often refers to Serena Williams as her idol (as so many tennis players today do).

But Kenin also says she “copied a few people” for various aspects of her playing style.

“I’ve looked up to Maria Sharapova, Anna Kournikova. I followed their matches when I was little. I feel like I got the ‘feisty.’ I saw what it’s like,” Kenin said.

“Yeah, I feel like that definitely helped me. I have part of the Russian stuff inside me, (the) fight and fierce that I have. Trying just to be confident, do what I do best,” she said, before adding: “And thank you to my parents for giving me the American dream.”