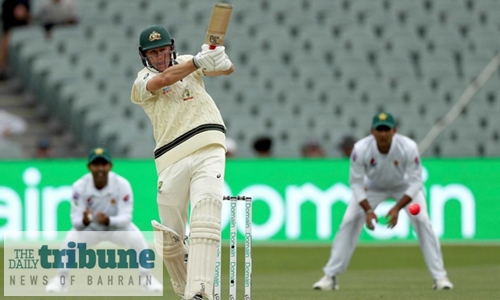 Marnus Labuschagne hit his fourth century in just 14 Tests to guide Australia into a commanding position against virus-hit New Zealand on the opening day of the third Test in Sydney yesterday.

The rock-solid number three, last year’s leading Test scorer with 1,104 runs at 64.94, again proved the Black Caps’ nemesis with his second ton of the series to continue his remarkable scoring sequence. Supported by Steve Smith’s 28th Test half-century, Australia reached stumps at 283 for three with Labuschagne unbeaten on 130 and Matthew Wade a breezy 22 not out.

The South African-born Labuschagne has now scored four centuries in seven Test innings this southern summer against Pakistan and New Zealand. “Terrific day,” he said. “When you bat on day one you know it can be a real prosperous day but if you get off to a shaky start it can be tough work.

“It’s all a bit of a whirlwind at the moment. I haven’t really sat down and completely thought about how amazing this summer has been for me.” Smith, who took 39 balls to get off the mark, shared in a 156-run stand with Labuschagne before he again missed out after a lengthy stay and was caught at slip off Colin de Grandhomme for 63 off 182 balls.

David Warner fell again to the leg-side trap on the third ball after lunch when he was caught by de Grandhomme at leg gully off Neil Wagner for 45. It was the fourth time in the series left-armer Wagner has snared Warner, who has yet to reach a half-century against New Zealand this summer after scoring an unbeaten 335 and 154 against Pakistan last November.

Opener Joe Burns was dismissed in the 15th over, squared up by de Grandhomme and caught by Taylor at first slip for 18.