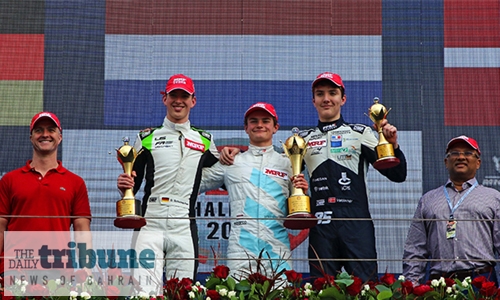 David Schumacher and Bent Viscaal claimed a win apiece in the weekend’s first two races of the MRF Challenge yesterday at Bahrain International Circuit (BIC), held in support of the FIA WEC Bapco 8 Hours of Bahrain. Schumacher won race two after Viscaal beat him earlier in the day for the race one victory.

Schumacher, son of former Formula 1 driver Ralf Schumacher and nephew of Michael Schumacher, claimed a thrilling late victory. The German started from fifth on the grid and was only able to move into the lead on the final lap to take the chequered flag in dramatic fashion. He won the 10-lap sprint in a total race time of 20 minutes 24.266 seconds.

He finished 1.702 seconds ahead of Dutch youngster Viscaal while Australian Dylan Young took the other podium step after going 1.728s off the pace. Josh Mason of Great Britain was fourth, Reece Ushijima of Japan fifth and Valdemar Eriksen of Denmark sixth. Earlier yesterday, Viscaal won the first race after taking the lead on the very first lap and holding on until the finish.

He completed the nine-lap sprint in 23:52.460. Pole-sitter Schumacher finished as the runner-up. He dropped to third on lap one but was able to move up to second position on lap six. Eriksen claimed the final podium place 6.548s behind. He started from sixth but did well on the first lap before battling for second with Schumacher. Rounding out the top six finishers on the final classification were Young, Mason and Ushijima.

Another two MRF races will be held today, with the first starting at 9.05am and the other at 11.10am.

Tally Solutions outlines the journey of VAT in Bahrain