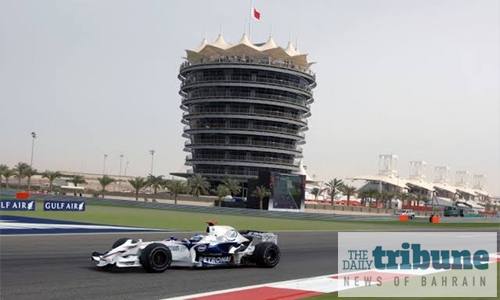 The spirt of Le Mans was alive once again at Bahrain International Circuit (BIC) in Sakhir yesterday as the first-ever FIA WEC Bapco 8 Hours of Bahrain got off to a flying start. The endurance racing spectacle is part of the BIC National Day Festival, which is set to begin welcoming the public at “The Home of Motorsport in the Middle East” from today. Gates are scheduled to be open from 12noon to 10pm and all are welcome to attend.

Tickets are available at the circuit and they cost BD1 per person. Rebellion Racing shone brightest after the sun came down and the floodlights came on at BIC, setting the overall pace in the World Endurance Championship’s (WEC) second free practice of the day. The trio of Norman Nato, Bruno Senna and Gustavo Menezes powered the team’s no. 1 Gibson-powered Rebellion R13 car to a fastest lap of one minute 42.471 seconds – more than two seconds quicker than the top time set by Team LNT in the first practice session held in daylight.

The Swiss outfit were this time 1.411 seconds quicker than Team LNT, who had Jordan King, Ben Hanley and Charles Robertson behind the wheel of their no. 5 AER-powered Ginetta G60-LT-P1. Toyota Gazoo Racing were in third and fourth for the second straight session. Mike Conway, Kamui Kobayashi and Jose Maria Lopez finished ahead of teammates Kazuki Nakijima, Sebastien Buemi and Brendon Hartley in their pair of TS050 Hybrids.

Conway and crew finished with a 1.750s gap from first place while Nakijima and teammates were 2.250s behind. Each of the top four were competing in the WEC’s top-tier LMP1 class. Taking fifth overall and leading all LMP2 teams were Jackie Chan DC Racing with the no. 37 Gibson-powered Oreca 07 driven by Ho-Pin Tung, Gabriel Aubry and Will Stevens. They were 3.676s from the top. Team LNT’s no. 6 Ginetta were sixth as the last LMP1 class runners.

Chris Dyson, Guy Smith and Michael Simpson were 3.902s off the leading pace. In first place amongst the LMGTE Pro cars was the no. 97 Aston Martin Vantage AMR of Alexander Lynn and Maxime Martin. They had a best lap of 1:55.696. Setting the pace in the LMGTE Am class were Team Project 1 in their no. 56 Porsche 911 RSR, driven by Egidio Perfetti, David Hansson and Matteo Cairoli. Their best time was 1:56.510. Meanwhile, Team LNT stole the show early on after setting the pace in the first 90-minute practice.

Their no. 5 Ginetta featuring Robertson, Hanley and King clocked a best lap of 1:44.791. They were 2.185 seconds quicker than the no. 1 Rebellion R13 of Senna, Menezes and Nato. Toyota Gazoo’s Hybrids were third and fourth. The no. 8 car of Nakijima, Buemi and Brendon Hartley was 2.665s off the pace; while the no. 7 challenger of Kobayashi, Conway and Lopez was 2.817s back. Team LNT’s no. 6 car of Dyson, Smith and Simpson, completed the top five and the LMP1 field 3.214s behind their sister team.

Leading the LMP2 class was the no. 22 Gibson-powered Oreca 07 of United Autosports team, driven by Paul Di Resta, Philip Hanson and Felipe Albuquerque. They had a best lap of 1:48.273. The LMGTE Pro runners were led by the 1:57.388 lap of Porsche GT tandem Richard Lietz and Gianmaria Bruni in their no. 91 Porsche 911 RSR-19 car. The LMGTE Am class was topped by TF Sport’s Salih Yoluc, Charles Eastwood and Jonathan Adam, driving the no. 90 Aston Martin Vantage AMR.

They had a best lap of 1:58.803. Action in the FIA WEC Bapco 8 Hours of Bahrain continues today at BIC. The next WEC session is set to be a third Free Practice over 60 minutes, starting at 11.15am.

There will be plenty for the whole family to enjoy from today at BIC’s vending area, located behind the Main Grandstand, with the start of celebrations in the BIC National Day Festival. The attractions will be available all through while the circuit is open is open from 12noon to 10pm. Kids’ entertainment will be a major part of what’s on offer.

Other attractions include cultural shows, a BDF fly-pass, a National Guard parachute display, roaming performers, music from the Ministry of Interior Police Band, and so much more. The weekend’s first of four nightly concerts also takes place today, featuring Emirati superstar Balqees. Her show is scheduled for an 8.30pm start.

BIC is treating all ticket-holders to an Open Paddock experience for both days of the Bapco 8 Hours of Bahrain today and tomorrow. The Open Paddock experience is unique to the WEC, and it is a fan-friendly initiative enjoyed by all. Aside from getting to watch all the high-octane action from the Main and Batelco Grandstands, race goers will have the unique chance to see up close and personal what goes on behind-thescenes in the WEC Paddock.

This is where the participating teams’ buildings are located to accommodate all team members while at the circuit. The Paddock is also where the teams have the entrances to their garages, so it will not be a surprise if fans get a chance to meet the WEC’s star drivers as they stroll around the vicinity.

Furthermore, fans will get to walk by the Race Control Tower, scrutineering garages, and the state-of-the-art Media and Medical Centres, all of which are crucial to the success of the race weekend. For further information on the FIA WEC Bapco 8 Hours of Bahrain and the BIC National Day Festival, visit BIC’s official website www.bahraingp.com or call the BIC Hotline on +973-17- 450000.