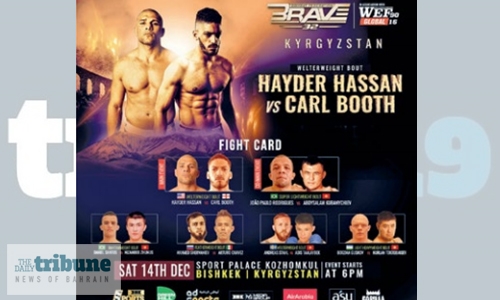 BRAVE Combat Federation lands for the first time in Kyrgyzstan on December 14th, featuring a main event for the ages as two of the world’s best Welterweights collide with Englishman Carl Booth making his much-anticipated return to the BRAVE CF fold. “The Bomber” will take on newcomer Hayder Hassan in Bishkek’s first-ever international MMA event.

The Bahraini-born brand will make its debut in a fourth country this year, after taking the Kingdom’s name to new territories such as the Philippines, England, and Romania throughout 2019. Also set for BRAVE CF 32 is the debut of Brazilian standout Daniel “Willycat” Santos. The Chute Boxe Diego Lima product takes on local hero Nizambek Zhunusov in a Bantamweight feature bout.

Another Brazilian will also make his debut as João Paulo Rodrigues, known for being Renan Barão’s first conqueror. Rodrigues takes on Abdysalam Kubanychiev in a Super Lightweight fight. Swedish standout Andreas Stahl is another debutant for BRAVE CF, as he looks to start his career in his new home with a win over Adis Taalaybek and extend his winning streak to three at Welterweight.

Rounding up the BRAVE CF 32 card, two other bouts for four debutants as Akhmed Shervaniev and Arturo Chavez meet at Featherweight while Light Heavyweights Bogdan Guskov and Nurlan Toktobakiev collide in the night’s opening fight. BRAVE CF 32 marks the first event of the partnership between BRAVE Combat Federation and star promotion WEF Global and will take place at the Sport Palace Kozhomkul.