Bahrain to fight for place in Gulf Cup semis: Sousa | THE DAILY TRIBUNE | KINGDOM OF BAHRAIN 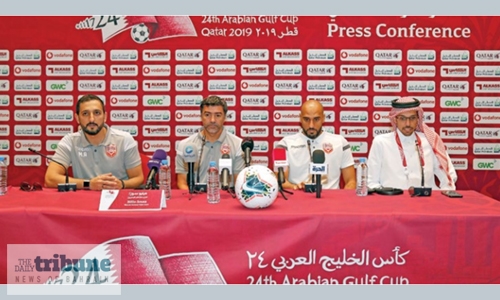 Bahrain to fight for place in Gulf Cup semis: Sousa

Head coach Helio Sousa admitted yesterday that Bahrain are in a tough position in their hopes to qualify for the semi-finals of the 24th Arabian Gulf Cup in Doha. After losing to Saudi Arabia 0-2 in their previous match on Saturday, the Bahrainis must win in their last Group B fixture against Kuwait this evening in order to have any shot at advancing to the final four.

But their qualification is not completely in their hands. They must wait to see what happens in the other match between Oman and Saudi to learn of their fate, and Sousa acknowledges the difficult situation they are in. “We are not in the position we wish and fight for,” Sousa said in his pre-match Press conference yesterday. “We are not in the best condition. We are the last one in the group and we had our chances to pass through, but now this does not depend only on us.

We must wait to see what the other teams can do. “We must do all we can to win against Kuwait and must expect the best situation from the other game in order to be in the semi-finals.” Bahrain take on Kuwait at Khalifa International Stadium while defending champions and current group leaders Oman play Saudi at Abdullah bin Khalifa Stadium. Both contests are scheduled for an 8pm kick-off. Bahrain must beat the Kuwaitis and hope that Oman defeat Saudi in order to qualify for the semis.

If Bahrain and Saudi win, there will be a two-team tie between Bahrain and Oman, with the tie-break being determined by superior goal-difference. A win for Bahrain and a draw between Oman and Saudi would force a tie-break between the Bahrainis and Saudis. Anything less than a victory for Bahrain would confirm their Gulf Cup exit. “Our group is very balanced,” said Sousa. “No one can say yet that they are there.

Oman is the only one that can say if they win they are there. All the others, even in winning, they are depending on what the other teams can do. This is very balanced.” Only the top two teams from each of the two groups at the end of this preliminary stage march on to the semi-finals. Iraq have already qualified from Group A while the other spot is up for grabs between the UAE and hosts Qatar. Yemen are out of contention.

Sousa noted that whatever happens in their semis bid, he is proud of the effort of the national team and their continued progress towards building a bright future for Bahrain football. “We are building an identity of playing,” explained the Portuguese tactician. “It was officially our 11th game that we played against Saudi; it is our first defeat. We are not unbeatable, we never were. We will lose for sure and it happened this last game against one great team.

“But we will keep building and this is what we are preparing on – to build a team for now and for the future. With all the players available and who have the fire and will to play for national team and who have the quality to do it, we are building a strong team for tomorrow.” Sousa was joined in his prematch conference yesterday by veteran goalkeeper Sayed Mohammed Jaffar and national team official Mohammed Abdulghaffar.