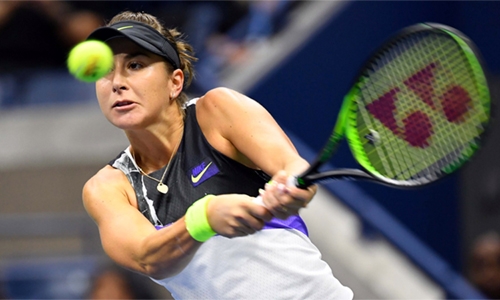 Belinda Bencic won’t become the first Swiss woman to win a Grand Slam title in 20 years at the US Open, but she adopted a positive outlook after a tough loss. Bencic took an optimistic attitude after her first Slam semi-final appearance, which ensured her return to the top 10 in the world rankings for the first time since February 2016. “Very much disappointed. After every loss, you are. That’s no surprise,” Bencic said.

“But overall really we talk with the team just now. What we reach here, semi-final, it’s my best result by far. We should definitely not take this for granted and be grateful for that. “I think that put me in a more positive mood.” Not since Martina Hingis won the 1999 Australian Open has a Swiss woman captured a Slam singles crown. Bencic reached the 2014 US Open quarter-final but was hit with injuries from 2016 to 2018, notably needing left wrist surgery in 2017.

Bencic’s ranking fell to 318th but her long road back saw her win at Dubai in February and achieve more than she imagined during the Flushing Meadows fortnight. “Definitely, like, positively, for sure we reached I think more than I expected here,” Bencic said. “I think my best result. Really, I’m taking it step by step.

Just really happy and positive about it.” Bencic missed six break chances in the first set and while she broke three times in the second set, Andreescu broke her four. “Overall I just think it was a big fight, a big battle,” Bencic said. “I think it was very tactical. Bianca plays smart. I think I can play smart or like try to make a right tactic.