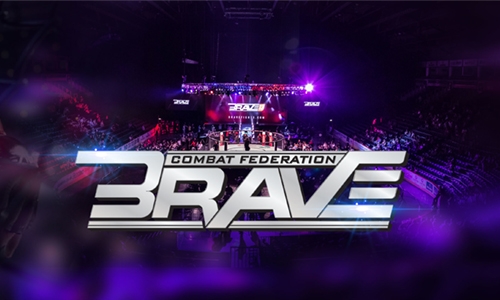 BRAVE Combat Federation, one of the biggest MMA promotions in the world, founded in the Kingdom of Bahrain, has joined forces with LFC, the biggest martial arts organization in Colombia. The first event of that landmark partnership will take place this Saturday night, in Bogotá, with a fight card mixing the absolute best Colombian talent with some of the biggest international stars. Yesterday, a few of the biggest names from the fight card paid a visit to DCRI, Centro de Rehabilitación Inclusiva.

While there, they showed the wounded soldiers and police officers some of the techniques they hope to put in display on Saturday night. Felipe Silva, a mixed martial artist from Brazil, known for his Knockout prowess, praised the initiative of putting together the soldiers and giving them a rundown on the best techniques from mixed martial arts. “I loved getting together with the DCRI, and this is the type of thing BRAVE and LFC have done since they signed the agreement.

It was awesome to receive their energy ahead of fight night and I hope that some of them can cheer for me, even though my opponent is Colombian” Felipe went on to invite several police officers that use the facilities at DCRI to join him in training, including service member Edson, an amputee who turned 21 years old yesterday. The crowd went wild with the opportunity that a few of their friends had to train with the best-mixed martial arts in the world.

The same seen with the other fighters who worked out, such as Luana Pinheiro, Yasmeli Araque, and Gabriel Fly, who all showed their gratitude to the Military officers of Colombia. Silva will headline the show against Dumar Roa, from Colombia. On fight night, he will have the companionship of his teammate, Gabriel Fly. The Featherweight BRAVE CF title contender goes up to Lightweight to face Jon Zaráte in a match of epic proportions, as both men are very well known in their home countries.

Both men train under legendary mixed martial artist and one of the biggest names in the sport, Cristiano Marcello, who was also excited to see MMA getting its due recognition in Colombia. “Amazing to see the DCRI full of people who have proudly served their countries. Amazing that they were all very keen to learn more about MMA and I hope my fighters have provided enough for them to check out the fights and become fans of BRAVE CF and LFC too”, said Marcello.

BRAVE 26 takes place at the Coliseo Hernan Jaramillo, Salitre, on Saturday night, with 11 fights that are sure to send Colombian mixed martial arts to the next level. The partnership between LFC and BRAVE CF has made possible by the tireless work of Jaime Barón, LFC president, and Mohammed Shahid, president of BRAVE CF.