Andreescu rallies to semis | THE DAILY TRIBUNE | KINGDOM OF BAHRAIN 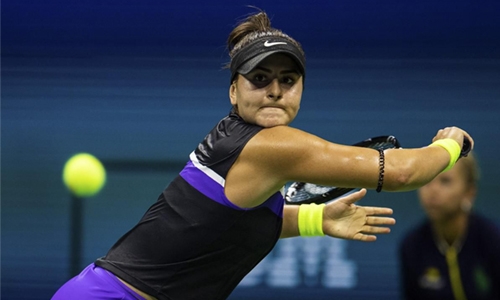 “I’m honestly speechless,” Andreescu said. “I need someone to pinch me right now. Is this real life?” Either Bencic or Andreescu, who have never played each other, will reach her first Slam final on Saturday at Arthur Ashe Stadium, where first-time Slam winners have been crowned three of the past four years. “Semi-final feels great right now,” Bencic said. “I was dreaming about this day coming but you never know. I worked hard for this.

Yeah, very nice feeling.” Andreescu, a winner this year at Indian Wells and Toronto, is the first teen in the US Open’s last four since Caroline Wozniacki in 2009. She credited being tested in her wins with giving her the poise to battle back after dropping the first set against a foe who had not dropped a set in the tournament. “I think it’s just the experience from playing these huge events this past year,” she said.

“All that experience is just catching up.” Andreescu could become the first teen to win a Grand Slam title since Maria Sharapova captured the 2006 US Open and she would be the youngest US Open champion since Russia’s Svetlana Kuznetsova in 2004. “This is honestly so crazy,” said 15th seed Andreescu. “A year ago I was in the qualifying round. I remember I was suffering from a back injury.” Mertens had lost only 16 games in four matches, but Andreescu, her first seeded foe, hit 40 winners to 22 for Mertens. Mertens broke for a 3-1 edge when Andreescu missed a backhand volley then held twice to claim the first set in 38 minutes.

“I was getting irritated because I wasn’t playing my best tennis,” said Andreescu. Andreescu broke at love for a 4-2 lead and closed the second set by taking 16 of the last 20 points. In the third, Andreescu smashed a backhand winner to break for a 5-3 lead and another on match point. “I’ve been working a lot on my fitness and mental strength,” said Andreescu. “It’s a result of all the hard work I’ve been putting in.”

Bencic knocked out topranked defending champion Naomi Osaka in the fourth round, assuring the Japanese star will be replaced atop the rankings on Monday by French Open champion Ashleigh Barty of Australia. Bencic, who reached the 2014 US Open quarter-finals, ensured a return to the world rankings top-10 for the first time since June 2016 with the victory. She sank as low as 328th after numerous injuries and 2017 left wrist surgery but the 22-yearold Swiss began the year 55th and has climbed from there, thanks in part to her third career WTA title in February at Dubai.

“Through the tough times it helped me to see a little different way the tennis when you can’t always play,” Bencic said. “For me this perspective changed and I’m enjoying so much the tennis now.” Bencic went on a 5-1 tie-break run to seize a 6-3 edge and took the first set after an hour when Vekic swatted a forehand beyond the baseline.