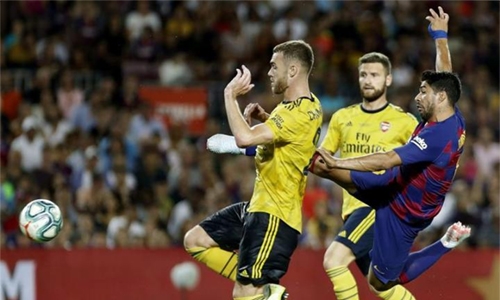 Luis Suarez’s late volley saw Barcelona to a 2-1 win in the Joan Gamper Trophy friendly in front of a bumper crowd at the Camp Nou, as Antoine Griezmann made his home debut following his big money move from Atletico Madrid.

Suarez flashed home Sergi Roberto’s lofted pass in the 89th minute in front of nearly 99,000 people, who packed the stands to see new signings Griezmann and Frenckie De Jong, with his strike and Ainsley Maitland-Niles’ comical own goal cancelling out Pierre-Emerick Aubameyang’s fine first half opener.

Barca are aiming for European glory this campaign after suffering Champions League humiliations against Roma and Liverpool the last two seasons. Before the match captain Lionel Messi addressed those defeats -- which saw Barca throw away comfortable firstleg leads before being dumped out -- in a speech to the crowd.