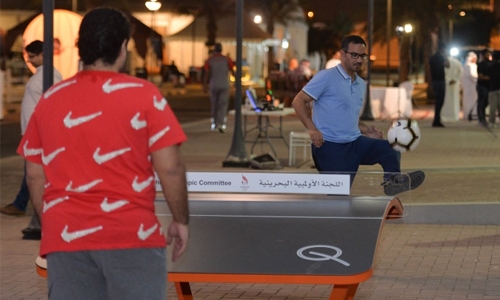 In his statement, Al Nusuf said bringing this type of sport to the country is in line with the keenness of the BOC, headed by Supreme Council for Youth and Sports First Deputy Chairman and Bahrain Athletics Association president Shaikh Khalid bin Hamad Al Khalifa, to include different new sports that develops the skills of the Bahraini youth. Al Nusuf added that the teqball show was also organized to ensure the success of the Nasser bin Hamad Ramadan Heritage Festival, held under the patronage of Shaikh Nasser bin Hamad Al Khalifa, His Majesty the King Representative for Charity and Youth Affairs, and Supreme Council for Youth and Sports chairman.

Teqball was presented in the world in 2017 to create value by contributing a “magically-curved” extension to the most popular sport of all - to football. Four sports can also be played on the Teqball ONE and Teqball SMART tables: teqtennis, teqpong, qatch and teqvolley. With these versatile ways of sporting and working-out, everyone can find the ideal sports activity independently of their age, sex and physical abilities We are absolutely convinced that all family members would soon discover the pleasures of sport on the Teqball table.

Teqball is a new sports equipment, which is perfectly suitable for professional footballers as well as amateur enthusiasts whose ambition is to develop their technical skills, concentration and stamina. The sport, run by Fédération Internationale de Teqball and is based in Switzerland, has been attracting some of the world’s best football players, such as Brazilian star Ronaldinho. It received recognition of the Olympic Council of Asia during the general assembly meeting held in Indonesia at the 2018 Jakarta Asiad.

Meanwhile, Dividend Gate Capital (DGC) chief executive officer Khaled Al Hammadi said he was pleased for initiating such partnership with the BOC to boost sports movement in the country. He extended his company’s full commitment to community programmes, especially those related to the youth and sports sector. Al Hammadi noted the role of the BOC in developing Bahrain sports, and hoped for this cooperation to continue in the future.