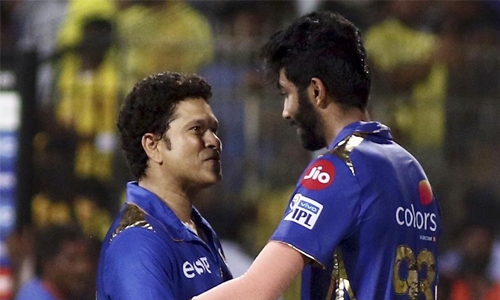 Indian cricket great Sachin Tendulkar yesterday hailed Jasprit Bumrah as the “best bowler in the world” after the Mumbai Indians paceman played a key role in his team’s fourth Indian Premier League title win. The 25-year-old took 2-14 in Sunday’s IPL final as Mumbai edged Chennai Super Kings by one run in the thrilling finale in Hyderabad.

He is set to lead India’s pace attack at the World Cup, which starts in England and Wales later this month. “Without any doubt, let me go on record and say that he is the best bowler in the world at this stage,” said Tendulkar, an advisor to the Mumbai team. “The best is yet to come.”

With Lasith Malinga giving away 32 runs from his first three overs and Chennai needing 18 off the last 12 balls, Bumrah choked the opposition in the penultimate over and sent Dwayne Bravo back to the pavilion for 15. He was named man-of-thematch for his efforts. “Winning a fourth title for Mumbai makes me very happy,” said Bumrah, the top-ranked bowler in the world in the oneday format.

“I was surprisingly very calm. I wasn’t panicking, just focusing on the next ball.” Bumrah has picked up 85 wickets in 49 ODIs and 51 scalps in 42 T20 games for India since his international debut in January 2016. India begin their World Cup campaign against South Africa in Southampton on June 5.