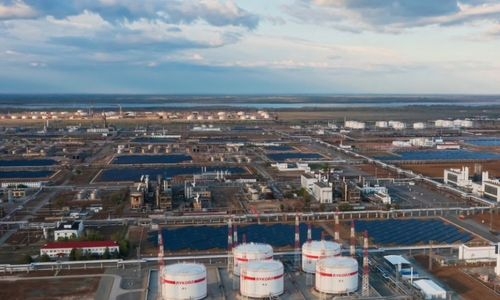 Both were technically oversold, with WTI on track for its lowest settlement since Jan. 5 and Brent for its lowest since Jan. 13. US gasoline and diesel futures were also down more than 5%. The US Federal Reserve raised interest rates by a hefty 75 basis points on Wednesday. Central banks around the world followed suit with their own hikes, raising the risk of economic slowdowns.

“The threat of a global recession continues to weigh on oil prices, with widespread monetary tightening over the last couple of days fueling fears of a significant hit to growth,” said Craig Erlam, a senior market analyst at data and analytics firm OANDA. The US dollar was on track for its highest close against a basket of other currencies since May 2002. A strong dollar reduces demand for oil by making the fuel more expensive for buyers using other currencies. “The crude market is under heavy selling pressure as U.S. dollar maintains strong upward trajectory amidst more reduction in risk appetite,” analysts at energy consulting firm Ritterbusch and Associates said.

The euro zone’s downturn in business activity deepened in September, a survey showed, suggesting a recession looms as consumers rein in spending and as governments urge energy conservation following Russia’s moves to cut off European supply.