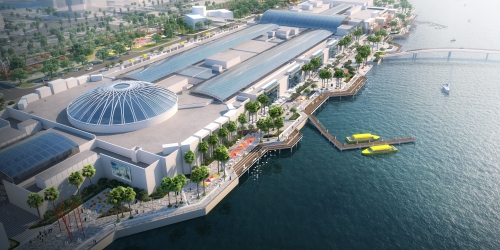 The project sets to extend The Avenues - Bahrain further along the west of Manama’s Seafront. The extension will add 41,200 square meters of leasable space, which will include 244 units, two entertainment areas, an ice rink, and a supermarket, as well as a basement parking, bringing the total leasable area in both phases to approximately 80,000 square meters.

Construction will commence in September 2022 and is expected to be completed by the first quarter of 2024. Upon completion, the promenade will extend by 600 meters to the west along the waters of Bahrain Bay, making The Avenues – Bahrain the largest waterfront shopping and entertainment destination, with a total length of 1.3 km.

Waleed Khalid Alsharian, Director of Al-Sorouh Management Company and CEO of Mabanee Company said, “The expansion plans will cement The Avenues – Bahrain as the largest development in Bahrain Bay and the Central Governorate, as well as a destination for citizens, tourists, and businessmen alike from the Gulf region and beyond, especially after the opening of the Hilton Garden Inn - Bahrain Bay hotel which is connected directly to The Avenues – Bahrain, and a part of the expansion plan that aims to provide a different experience beyond shopping.”

The extension will include new districts characterized by eloquent designs. In addition to the extension of the existing Grand Avenue, new districts such as The Forum, Grand Plaza, Electra, and the Souk, will each have their own unique character that is expressed through distinctive architectural styles inspired by modern traditional concepts.

President Yoon says any talks with North Korea should be more than 'show': South Korea