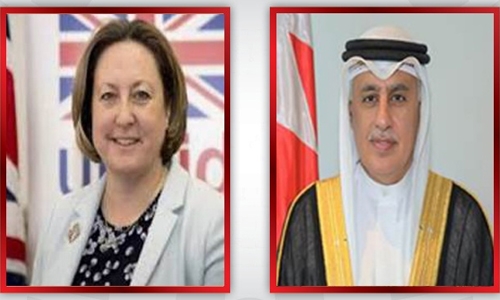 Minister of Industry, Commerce and Tourism Zayed R. Al Zayani announced yesterday the official launch of the Free Trade Agreement (FTA) negotiations between the six countries of the Gulf Cooperation Council (GCC) and the United Kingdom.

The move was announced during a phone call that took place earlier today between Al Zayani and Secretary of State for International Trade and President of the Board of Trade Anne-Marie Trevelyan, joined by Minister of International Trade Ranil Jayawardena, as well as Secretary-General of GCC Dr. Nayef bin Falah Al-Hajraf, Governor of Saudi General Authority for Foreign Trade and General Coordinator for Negotiations at the GCC General Secretariat-General  and Head of GCC Negotiations Team, Abdulraham Ahmed Al Harbi,  and Assistant Under Secretary for Domestic and Foreign trade at the Ministry of Industry, Commerce and Tourism in Bahrain Shaikh Hamad bin Salman Al Khalifa.

An FTA between the GCC countries and the UK would add a new chapter to what is already a long-standing and strategic partnership, evidenced by annual trade of £30 billion in goods, as well as an additional £19 billion of services, making it one of the largest trading relationships for both parties.

“It brings me great joy and pleasure to officially announce the official launch of FTA negotiations between GCC countries and UK today, an initiative that we have worked tirelessly on realizing since the Kingdom of Bahrain assumption of the GCC presidency at the beginning of this year,” Al Zayani said:

“It is no doubt that we shall collectively embark on a new chapter, which will solidify our long-standing trade and investment cooperation and build upon the strong foundations forged over the past centuries.

“At this juncture, I feel obliged to present my thanks and gratitude to His Majesty King Hamad bin Isa Al Khalifa, and His Royal Highness Prince Salman bin Hamad Al Khalifa, the Crown Prince and Prime Minister of the Kingdom of Bahrain, for their continued guidance and support towards this significant economic initiate, for without which we wouldn’t have been able to reach what we have reached today.

“I also wish to thank my GCC counterparts and the Government of the United Kingdom led by The Right Honorable Prime Minster Boris Johnson, and H.E. Minister Trevelyan and H.E. Minister Jayawardena and their teams for their continuous and invaluable cooperation.

“Moreover, I wish to thank the GCC Secretariat led by Secretary General Dr. Al Hajraf, and all GCC member states working teams on their genuine efforts and congratulate them on this remarkable milestone. Finally, I wish Dr. Al Harbi and his negotiating team a fruitful and successful negations.”

Idris Elba says he is not going to play James Bond