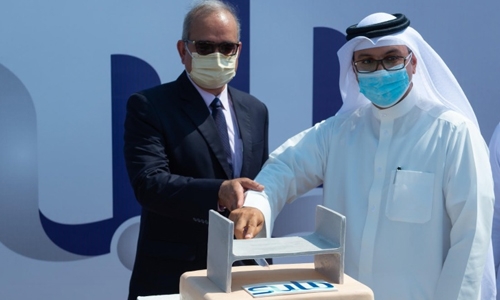 The new private port facility, located at Salman Industrial City in Hidd, is set to significantly enhance the company’s supply chain and deliver strong environmental and economic benefits for Bahrain and its customers.

High level dignitaries, SULB’s Board and management, customers, partners and the media were on hand to commemorate the milestone opening where SULB was presented the Port/Private Jetty Operator License issued by the Ministry of Transportation and Telecommunications’ Ports and Maritime Affairs.

Now in operation, it will allow for a strong reduction in SULB’s usage and dependance on Bahrain’s public roads and port network. Shipping directly by sea to customers, nearly one million tons of SULB’s product will be taken off Bahrain’s roads each year. This is equivalent to 40,000 trailers annually, which will not only significantly reduce traffic in the Kingdom and wear and tear on roads, but is also expected to result in a substantial reduction in its post-production greenhouse-gas emissions nearing 18,000 tons per year.

Enhanced efficiency and a range of resulting economic benefits will also be realised from the company’s streamlined delivery capabilities. With its own shipping facility, SULB has now effectively secured its supply chain bolstering business continuity for the company and its global customers. Savings and the securing of its strong forex contributions to Bahrain’s economy will also be supported by the new facility through reductions in the company’s cost of exporting and a greater return of earned dollars. The new facility will help SULB save approximately 30% on its annual Freight on Board (FOB) charges while also helping customers reduce their procurement fees by up to 20% as a result of SULB’s onsite loading and shipment capabilities.

SULB currently exports 99% of its products annually to customers in more than 25 countries located across the broader MENA region, South East Asia, Americas and Europe. Today, nearly 50% of all structural steel sections used in the GCC’s infrastructure development are manufactured by the company in Bahrain.

“We are delighted to see private sector initiatives and investments that support greater efficiency, Bahrain’s position as a leading regional exporter and which contribute to the Kingdom’s plans and policies to see the economy operate in a more sustainable and environmentally friendly manner,”Assistant Undersecretary for Ports Affairs Bader Hood Al Mahmood said.

“We congratulate SULB, its Board, management, shareholders and employees on this milestone, which not only furthers the company’s objectives but also supports key goals of the Kingdom’s Vision 2030.”

“We are delighted to mark this important event in the presence of our partners and we’re extremely grateful for the exemplary support extended to us by Bahrain’s Ports & Maritime Affairs in the development and construction of the SULB Wharf,” Ravi Singh, CEO of SULB, said.

“This is a win-win proposition for the Kingdom, our company, our customers and our community. The new facility will help us operate more efficiently. It significantly strengthens our export supply chain for the benefit of our customers, the Kingdom’s economy and our position as one of Bahrain’s largest exporters and net forex earners. Importantly, it also allows us to make positive strides in our sustainability mission. With our own shipping facilities onsite, we will help in decongesting Bahrain’s roads and significantly reducing our own carbon emissions in support of cleaner air and the meeting of the government’s air quality targets.”

The inauguration of the facility was followed by a water salute executed by members of the SULB team and two ships are expected to arrive at the facility within the first month of its operation. The first will arrive to load for export approximately 13,000 tons of “Made in Bahrain” steel beams and the second ship with 32,000 tons will be loaded by month’s end.

SULB produces 1.7 Mtpa of Direct Reduced Iron from iron ore pellets manufactured by sister-company Bahrain Steel, 1.2 Mtpa of steel and delivers almost 800,000 tons of finished beams, angles and channels along with its sister company in Al Jubail, Saudi Arabia. Steel beams are required for the creation of infrastructure related to heavy industries like refineries, steel and petrochemical plants as well as in high rise buildings, bridges, airports, convention centres and other long span architecture.

The company is 51% owned by Foulath Holding, the Bahrain-based investment vehicle for the metals industry across the Middle East region. Foulath has been established by the six GCC countries through their investment holding company Gulf Investment Corporation (GIC). It is owned 49% by Yamato Kogyo, a Japanese global major in structural steel production.