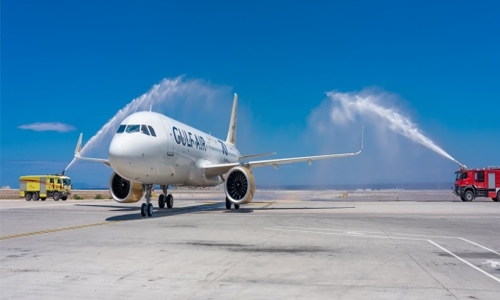 Gulf Air, Bahrain's national carrier, has celebrated its inaugural flight to Santorini in Greece as flight GF034 was welcomed into Santorini International Airport with a water cannon salute.

Before departing from Bahrain International Airport, passengers were handed special boarding passes and commemorative certificates in celebration of the airline’s first flight from Bahrain to the Greek island of Santorini. The flight was operated by Gulf Air’s new aircraft the Airbus A320neo that features 16 Falcon Gold seats and 120 economy class seats.

“Earlier this month, Gulf Air operated its inaugural flight to Mykonos and with today’s launch of Santorini flights, the airline aims to boost its network with popular boutique seaside destinations that are favourite to many tourists and families in the Kingdom of Bahrain and the region," Acting Chief Executive Officer Captain Waleed AlAlawi said. 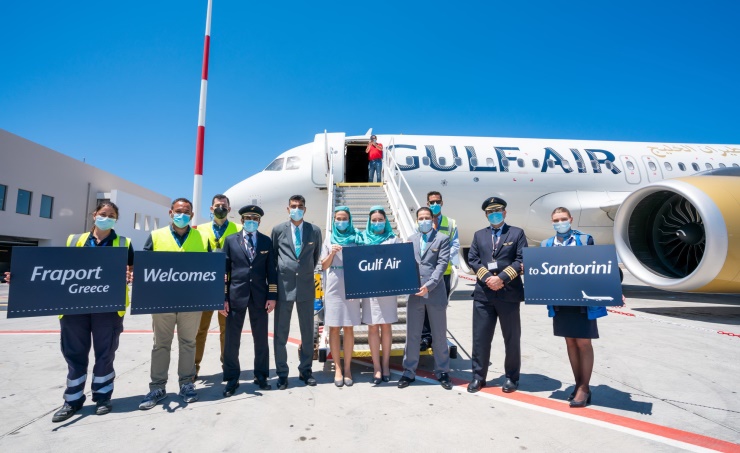 "These strategic additions come in place as the travel demand gradually grows towards the summer holiday with travel restrictions easing off in Europe”.

Both Mykonos and Santorini will be served until the end of September with two weekly frequencies.

Last month, the airline announced that all its flights would be operated by 100% vaccinated crew including pilots and flight attendants. The airline has started its internal vaccination campaign for its operating crew and front line staff in December and is proud to be one of the first airlines in the world to able to provide peace of mind to all passengers flying to any destination of its growing network.

Recently Gulf Air announced offering complimentary COVID-19 travel insurance coverage to all ticket holders including health and quarantine expenses in the unexpected circumstances of being diagnosed with or contracting COVID-19 during their journeys.

All tickets booked, including redemption tickets, on Gulf Air flights for travel starting from May 10 until November 10, 2021, are automatically covered with COVID-19 insurance at no extra cost.

All passengers, according to the newly announced insurance policy and in the unfortunate event of being diagnosed with COVID-19 while travelling abroad, will be covered for repatriation assistance, medical and hospital costs abroad as well as quarantine accommodation costs. Coverage is applicable on Gulf Air operated flights with Gulf Air ticket numbers that are purchased through the airline’s website, the call centre, Gulf Air’s sales offices or travel agents.

The way this man says ‘Thank you, Bahrain’ is unique