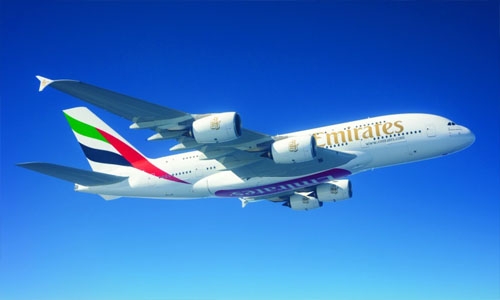 Emirates introduces daily scheduled A380 services to Bahrain for June

Emirates will introduce the first scheduled Airbus A380 service to Bahrain during the month of June.

This is the first time an airline operates the double-decker on a regularly scheduled basis to the Kingdom and demonstrates the operational readiness of the new airport to provide the necessary infrastructure to accommodate for an A380 service, the company said.

The change of aircraft will help meet the growing demand to and from Bahrain during the summer and underscores the airline's commitment to making connections for travellers to and through Dubai even easier.

The Emirates Airbus A380 aircraft serving the Dubai-Bahrain route offers a total of 507 seats in a three-class configuration, with 417 seats in Economy Class, 76 seats in Business and 14 First Class Private Suites.

Emirates currently operates the A380 to New York JFK, Paris, Jeddah, Amman, Cairo, Frankfurt, Bangkok, Guangzhou, Hong Kong and Moscow and will soon be deploying the aircraft to Los Angeles in July.

Emirates has been serving Bahrain for over two decades.

Bahrain has reopened its borders for tourists and visitors, and travellers from the UAE can travel to the Kingdom without having to quarantine on either end of their journey.

Passengers are however urged to check Bahrain's entry requirements before travel.

Bahrain in deal with Russia to manufacture and distribute Sputnik V