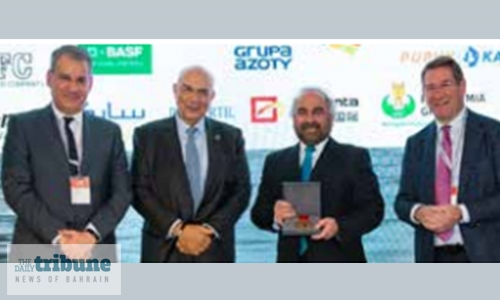 GPIC has won a Gold Medal in the field of Industrial Excellence (Industry Stewardship Champion) awarded by the International Fertilizer Association (IFA) on the sidelines of the International Fertilizer Conference held in Versailles, France. The medal was received by company President Dr Abdulrahman Jawahery from IFA President Dr Mustafa Al-Turab.

The event was attended by IFA Director General Charlotte Hebebrand, the Arab Fertilizer Association (AFA) Secretary-General Engineer Mohamed Abdallah Zain along with more than 300 leaders of the fertilizer industry from around the world.

In a statement, Dr Jawahery expressed happiness at the honour, which is given to companies that have made exemplary contributions in the service and dedication of the fertilizer industry standards related to safety and environmental care as well as a commitment to sustainable management in the agricultural nutrient industry.

He said high productivity depends heavily on a safe and stable workforce in its environment.