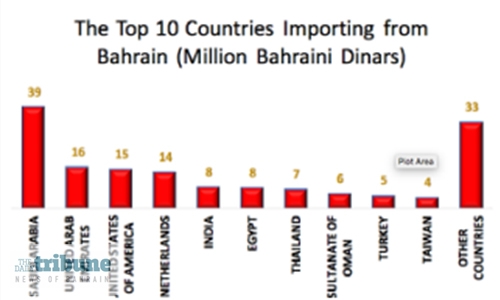 Bahrain’s trade balance improved 31 per cent during October 2019, when compared to a year ago, as the Kingdom exported BD154 million worth of products of national origin, iGA’s new foreign trade report said.

The Kingdom in October 2019, the Information & eGovernment Authority (iGA) said, recorded a deficit, the difference between exports and imports, of BD197m, compared to BD286m in the same month a year ago. During October, the value of imports decreased by 17pc, while exports of national origin dropped by 10pc. However, the total value of re-exports increased by 25pc during the month.

Imports decreased by 17pc reaching BD425m during October 2019 compared to BD515m for the same month the previous year.

Top 10 countries accounted for 68pc of the imports, with the remaining accounting for 32pc. China ranked first with a total import value of BD64m, Australia second with BD38m and Saudi Arabia third with BD35m.

With a total value of BD36m, Aluminum oxide topped the products imported to Bahrain. Non-agglomerated iron ores and concentrates came second with BD20m and four-wheel drive cars third with BD19m. 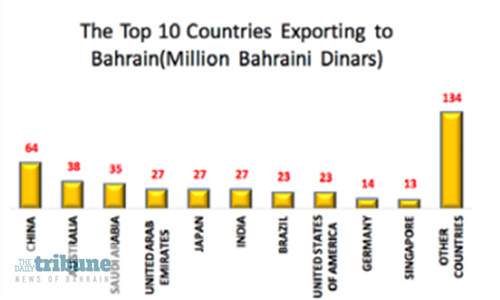 Exports of national at BD154m

The value of exports of national origin decreased by 10pc to BD154m during October 2019, compared to BD171m for the same month of the previous year.

The top 10 countries purchased from Bahrain accounted for 79pc of the total value, with the remaining countries accounting for 21pc. Saudi Arabia by importing BD39m emerged as the top buyer from Bahrain. The United Arab Emirates came second with BD16m and United States of America third with BD15m. 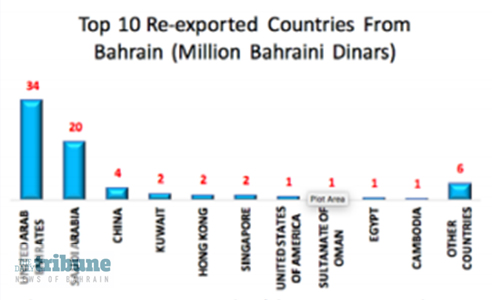 The total value of re-exports increased 25pc to reach BD74m during October 2019, compared to BD59m for the same month of the previous year.

Agglomerated iron ores and concentrates emerged as the top product re-exported from Bahrain with BD14m, fourwheel-drive cars came in second place with BD11m, and Gold ingots came third with BD9m.