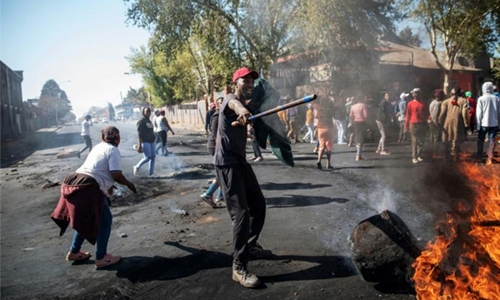 South African police yesterday arrested several people following road blockades and violence by truckers protesting against the employment of foreign drivers. Police spokesman for the southeastern province of KwaZulu-Natal (KZN) Jay Naicker said in a statement that at least 20 individuals had been arrested “in connection with incidents related to protests within the trucking industry”.

Eleven trucks on Sunday blocked the road to Richards Bay Harbour, one of the deepest natural harbours in Africa, KZN police said. In the Western Cape province, several protesters blocked roads with their vehicles, authorities said. “Several roads had to be closed for traffic from early morning due to trucks blocking the road while others were seen offloading sand on the road,” said a statement from the provincial transport minister Bonginkosi Madikizela.

Human Rights Watch last week reported that dozens of truck drivers in the country have died in attacks against foreigners since March 2018. The report was released after a recent spate of xenophobic violence fuelled by economic decline and record unemployment in Africa’s most industrialised economy. A South African truck owners’ association quoted by the HRW reported 75 such incidents since March this year, 15 of which were independently confirmed by the watchdog.

Lieutenant - General Khombinkosi Jula, police chief for KZN province, where at least two trucks were torched, said they had intensified patrols along major routes. “We are on high alert for those that are resorting to acts of criminality and claim to be protesting,” he said in a statement. South African Transport and Allied Workers Union (SATAWU), which has over 200,000 members, distanced itself from the action.

Sipho Zungu, chairman of the All Truck Drivers Foundation said that his group had “nothing to do with the strike”, but stressed that it was fighting for the employment of South African drivers. “People of South Africa are hungry, they are sitting at home.. while companies in South Africa are employing foreigners ...(because) its cheap labour.

We are hungry and angry,” Zungu said. Labour ministry spokesman Makhosonke Buthelezi last week said that employers “prefer (foreign truck drivers) because they can work long hours at a much cheaper cost, so they tend to exploit them”.

Transport Minister Fikile Mbalula said in June that the crisis in the trucking industry was caused by an “oversupply of foreign drivers in the industry”, many of whom are undocumented.

In a joint statement with the police on Sunday, the government condemned the violence as “economic sabotage threatening the economic viability” of the southern African region.