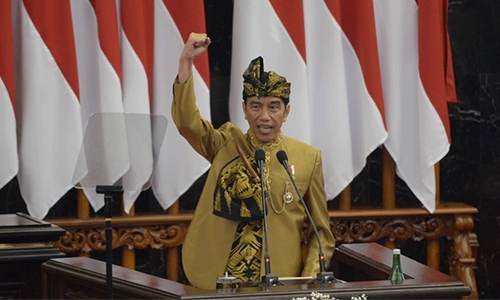 Indonesian President Joko Widodo said yesterday he would press on with plans to move the nation’s capital and roll out measures to kickstart Southeast Asia’s biggest economy as it feels the sting of slowing global growth. Widodo asked parliament to sign off on a plan for a new capital in Borneo, shifting Indonesia’s political heart from Jakarta -- one of the world’s fastest-sinking cities that is plagued by a host of ills, from eye-watering traffic jams and pollution to the risk of earthquakes and floods.

“I’m asking for your permission to relocate our capital to the island of Kalimantan,” he told lawmakers, referring to Indonesia’s portion of Borneo, in a sweeping state-of-the-nation address. “A capital is not only a symbol of a nation’s identity, it also represents its progress,” he added. Widodo did not reveal a specific location for the country’s new capital or timing for any move. Speaking a day before the 74th anniversary of Indonesia’s independence, the recently re-elected leader said his second term would focus on cutting red tape and luring foreign investment.

He pledged to boost lagging productivity, turn Indonesia into an electric-vehicle hub and focus on improving worker skills in the sprawling country of some 260 million people. Analysts have said Indonesia should overhaul its rigid labour laws and dizzying bureaucracy, which have been cited as barriers to investment. “We have to be faster and better than our neighbours,” Widodo said. “We’re facing a tumultuous global economy and geopolitical change.”

Later Friday, Widodo announced a spending budget of 2.5 trillion rupiah ($175 billion) for 2020, and ticked up the government’s economic growth forecast for next year to 5.3 percent, from an earlier 5.2 percent. “That’s going to be difficult to achieve given current global conditions,” said University of Indonesia economist Lana Soelistianingsih, referring to the new forecast. Widodo struggled to lift growth in his first term despite a huge roads-to-railways infrastructure building blitz.

The economy has been expanding around five percent annually, but that is well short of the seven percent Widodo had pledged in his first term. This week, it posted its slowest rate of quarterly growth in two years.  Resource-rich Indonesia is grappling with weaker prices for commodities like coal and palm oil, as the global economy falters on the back of US President Donald Trump’s intensifying trade war with China.