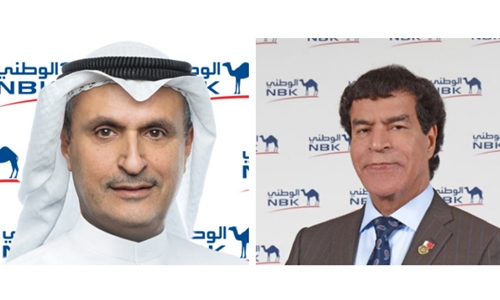 The improved profit performance in NBK Bahrain was attributed to increased operating banking revenues despite the challenging operating environment. Isam Al-Sager, NBK Group Chief Executive Officer said: “Once again, NBK Group proves its dominance in the regional market and solidifies its leadership position through the outstanding performance of yet another one of its regional operations, NBK-Bahrain.

These solid results come in line with the Group’s strategy aimed at strengthening its position throughout the MENA region as well as diversifying its revenue streams.” Moreover, Al-Sager affirmed that NBK-Group will continue to focus on its international operations and foster external growth to complement its domestic market dominance in Kuwait. Ali Fardan, NBK-Bahrain General Manager, said: “We continue to build on NBK-Group’s clear strategy to focus on our core banking business to consistently drive solid results.

In addition to that, we have a very talented and experienced team that backs our operations year after year. I am confident that we are set to achieve further growth in the remaining part of 2019 and beyond.” NBK has been present in Bahrain since 1977 and enjoys strong and historical relationships with the major Bahraini and international companies. NBK-Bahrain’s total assets increased by 12.8 pc y-o-y to USD 18.1 billion (BHD 6.824 billion), compared with USD 16.042 billion (BHD 6.048 billion) for the same period of the previous year.