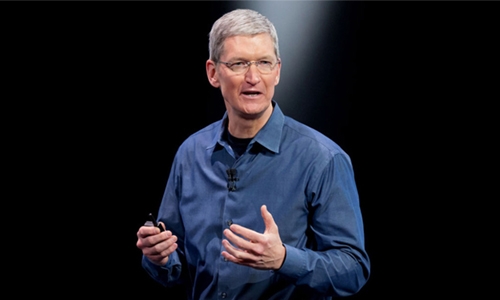 Apple on Tuesday delivered stronger-than-expected results in the just-ended quarter as growth from services helped offset weak iPhone sales, sparking a rally in shares of the tech giant. Profit in the quarter ending in June fell 13 percent from the year-ago period to $10 billion while overall revenues increased one percent to a better-than-forecast $53.8 billion. The results beat reined-in expectations of analysts, and Apple shares rose more than four percent in after-hours trade.

As iPhone sales weakened, Apple has been shifting to earnings from digital content and services sold to the legions of fans of its devices. “This was our biggest June quarter ever -- driven by all-time record revenue from services, accelerating growth from wearables, strong performance from iPad and Mac and significant improvement in iPhone trends,” said Apple chief executive Tim Cook. Apple has more than 420 million paid subscriptions across its array of services and is confident that number will eclipse 500 million next year, according to chief financial officer Luca Maestri.

Apple has stopped reporting iPhone unit sales, but Cook said he saw a “strong customer response” to iPhone promotions and financing programs. Apple saw its sales improve in the crucial China market, which included a double-digit increase in services revenue driven by strong growth in the App Store there, according to the company.

The sale of iPhones in that country was boosted by government stimulus, pricing moves by Apple, and trade-in and financing programs, Cook said. “Each of our categories -- iPhone, iPad, Mac, Wearables, Services -- everything improved sequentially,” Cook said of Apple’s performance in China. “So we couldn’t be happier with the results or the progress.”

Long the driver of Apple’s money-making machine, iPhone revenue overall was down 12 percent from last year to $26 billion. Sales of Mac computers and iPad tablets were up in the quarter, as was a “wearables and accessories” category that includes Apple’s smartwatch, smart speaker and popular wireless ear buds. Money taken in from services, which Apple has repeatedly stressed as being a potential big revenue source for the company, rose to $11.5 billion from $10 billion in the same quarter last year.

“These results are promising across all our geographic segments, and we’re confident about what’s ahead,” Cook said. “The balance of calendar 2019 will be an exciting period, with major launches on all of our platforms, new services and several new products.” Apple launches slated for later this year include an Apple TV+ streaming television service to compete against the likes of Netflix and Amazon along with a new credit card that ties in with its Apple Pay digital payments. Apple Card is being tested by thousands of the company’s employees and will launch in August, according to Cook.

The company said it expects revenue between $61 billion and $64 billion in the current quarter. Apple ended the quarter with its cash reserves reduced to nearly $211 billion, having spent $5 billion paying off debt, some $3.6 billion on dividends and the like, and $17 billion buying back nearly 88 million shares of stock, according to Maestri.