Over 60,000 visitors to Bahraini Farmers' Market in four weeks | THE DAILY TRIBUNE | KINGDOM OF BAHRAIN 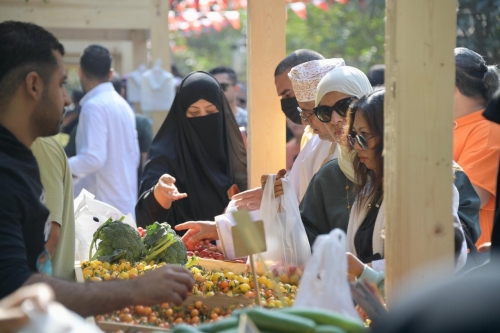 Over 60,000 visitors to Bahraini Farmers' Market in four weeks

The tenth Bahraini Farmers’ Market concluded its fourth week on high note, with the number of shoppers, including citizens, residents and visitors, exceeding 60,000 since the beginning of this year's edition on December 10.

The weekly Market is organised by the Ministry of Municipalities' Affairs and Agriculture in partnership with the National Initiative for Agricultural Development (NIAD).

The Organising Committee indicated that during this year’s edition, the great number of participating Bahraini farmers and agricultural companies, in addition to the introduction of new accompanying events have contributed to further boosting the Market.

In this context, the committee highlighted the Tourism Ministry’s participation with a number of events, including the celebration of the kingdom’s national days, in addition to the creation of a special corner for children, called (MUN kids).

In this regard, farmers expressed their delight over the return of momentum to the Bahraini Farmers' Market after the COVID-19 pandemic, affirming that the market has regained its place among the important initiatives in supporting the agricultural sector.

They expressed thanks and appreciation to the Municipalities Affairs and Agriculture Minister and NIAD for the tremendous efforts they had exerted to prepare well for this edition and ensure its success.

They asserted that the increasing number of participants and the introduction of new products on which there is a high demand have contributed to attracting more local shoppers, as well as visitors from brotherly and friendly countries, which boosts the agricultural and tourism sectors in the kingdom.

The Bahraini Farmers’ Market is held every Saturday at the Budaiya Botanical Garden, from 07:00 a.m to 01:00 p.m.