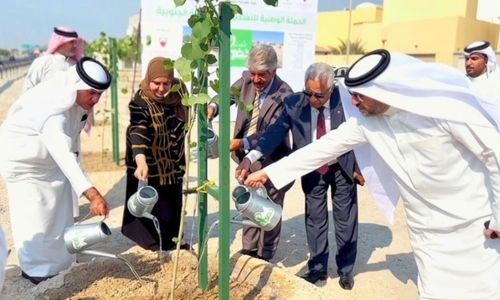 A campaign to plant 3,383 trees and shrubs along 945 linear metres on the National Charter Highway in the Southern Governorate got underway yesterday.

The drive is supported by the Royal Humanitarian Foundation (RHF) and implemented in cooperation with the Ministry of Municipalities and Agriculture and the Supreme Council for the Environment.

The tree planting was the first in the second phase of the Forever Green campaign launched by the National Initiative for Agricultural Development (NIAD) to be carried in the Southern Governorate. I

Deputy Governor of the Southern Governorate Brigadier General Isa Thamer Al Dosari, Director General of the Southern Municipality Asim Abdullatif, Head of The Department of Follow-up Services and Research in the governorate Mohammed Isa Al Nuaimi, and senior officials interested in the agricultural and environmental sector were present.

This RHF support is in line with Bahrain’s national goals to expand green areas and plant trees that are commensurate with its climate, which contribute to the absorption of carbon emissions and mitigate the effects of climate change.