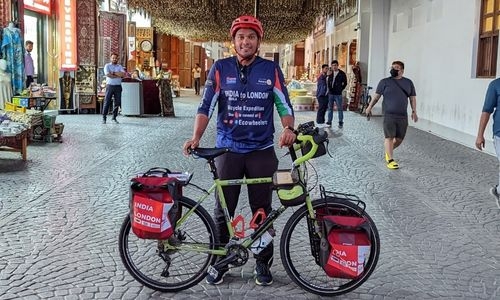 Bahrain is a stopover for a bizarre adventurer! IT expert and cyclist from the South Indian state of Kerala, Fayis Asraf Ali, is in Bahrain enroute to London which is set to be his final destination after crisscrossing 35 countries.

From the South Indian state of Kerala, Ali is biking his way to London to cover 30,000km.

After departing Thiruvananthapuram on August 15 where state Education Minister V Srivankutty flagged off his journey, he arrived in the Kingdom of Bahrain on November 20.

Speaking to The Daily Tribune, Ali said: “I was working as an engineer in Saudi Arabia, but my father was ill, so I resigned and stayed at home and couldn’t find any job.

I used to take care of my father.

After my father passed away in 2018, I started visiting my wife in Mangalore because I was feeling so lonely.

It was at this point that I discovered my passion for cycling.

“I began my first voyage by cycling 104 days from Kerala to Singapore.

I was really motivated and convinced that I could complete a lengthy bicycle tour, so I chose to cycle to London.

Bahrain is presently the sixth country on my route, and I will be departing on Friday to continue.

Ali says that to make extraordinary achievements, one has to make several sacrifices.

“I do not want to go back to work, and I want to achieve something extraordinary before I depart from this world,” he stated.