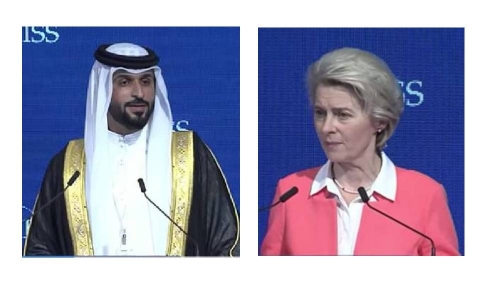 The 18th edition of the IISS Manama Dialogue kick-started yesterday to a huge round of applause, with Bahrain renewing its readiness to play a role in ending the Russia-Ukraine war and calling on both countries to begin serious negotiations.

“The Kingdom of Bahrain stands ready to play its part in promoting peace and coexistence,” said His Highness Shaikh Nasser bin Hamad Al Khalifa, the representative of His Majesty the King for Humanitarian Works and Youth Affairs, in his address before the dialogue participants.

His Majesty King Hamad bin Isa Al Khalifa, HH Shaikh Nasser said, reiterates his call for peace and coexistence and engagement in diplomatic dialogue and peaceful means as a starting point to end wars and conflicts.

HH Shaikh Nasser said Bahrain calls on world powers to maintain international peace and security and said Bahrain “will not hesitate to play any role required in this regard.”

Recalling His Majesty King Hamad Al Khalifa’s speech during the visit of His Holiness Pope Francis, Shaikh Nasser said that the Kingdom is ready to be a meeting ground and a friend to all to end the conflict.

Themed ‘Rules and Competition in the Middle East”, the event is organised by the International Institute for Strategic Studies (IISS), in cooperation with the Foreign Affairs Ministry of Bahrain.

In her keynote speech, Ursula Von Der Leyen, the President of the European Commission, hailed Bahrain as a driving force for dialogue between countries and cultures.

Bahrain’s achievements, Leyen said, have been remarkable and remained a “voice of wisdom” and a “voice for engagement” in difficult times for the world. Citing the spillover effects of the “atrocious war” waged by Russia against Ukraine, the EC President drove attention towards its efforts on global food security and energy security crisis.

Calling Gulf the “energy supplier” of the world, Von Der Leyen said the world is going through a tectonic shift in the energy landscape and urged oil-producing nations to allow access to oil and gas at reasonable prices.

Highlighting the adverse effects of climate change, the EC president called for investing massively in clean tech and infrastructure while drawing attention towards the abundance of natural resources for clean energy in the region.

She stressed the need for diversifying into low-emission fuels such as hydrogen.

Von Der Leyen said that Russia is using the very same Iranian drones to attack Ukraine, which was spotted earlier in attacks on citizens of Abu Dhabi and oil tankers off the coast of Oman.

Referring to them as a “blatant crime” against humanity, Von Der Leyen admitted that not heeding to warnings by Gulf countries against Iran was a mistake. She said that it took the EU too long to understand that the world should have also looked at Iran’s other forms of “weapons proliferation from drones to ballistic missiles”, alongside nuclear, calling for a coordinated approach on Iran with a broader focus.

In this regard, she also hailed the dialogue as a historic opportunity to build new ties with the middle east while announcing the appointment of a special EU representative to the Gulf. Later in a question and answer section, Von Der Leyen defined the oil price cap decision as a method for reducing Russia’s revenue while providing vulnerable countries access to oil.