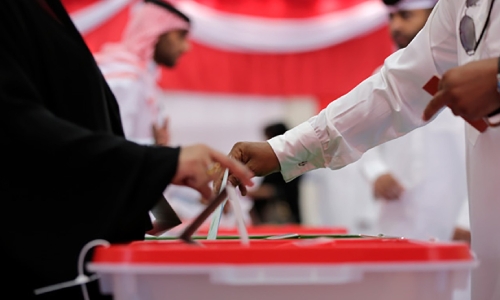 The stage is set for yet another high-voltage poll battle in Bahrain, with the authorities here welcoming aspiring candidates to make their candidacy official for the upcoming Parliamentary and Municipal Council election next month.

They, however, will get back this amount once they clear their electoral advertisements and tents after concluding campaigns.

Last year, the House of Representatives rejected a bill by the Shura Council to raise the fee for parliamentary elections from BD200 to BD400.

The deputies had also rejected another proposal to increase the nomination fee for municipal elections from BD50 to BD200.

Candidates vying for a seat at the 40-member national assembly may pay their nomination fees on the first floor of the Justice, Islamic Affairs and Endowments Ministry building in the Diplomatic Area during official working hours.

“They may also pay those fees at relevant supervisory committees between October 5 and 9, from 5:00 pm to 9:00 pm,” said Mohammed Abdulrahim Bucheeri, Assistant Undersecretary for Courts and Documentation Affairs at the Justice, Islamic Affairs and Endowments Ministry.

Candidates may also pay their fees and insurance amounts at supervisory centres from Wednesday until Sunday between 5 am and 9 pm,” said Mohammed Adel Abu Hassan, Assistant Undersecretary for Resources and Information at the Ministry of Municipalities Affairs and Agriculture.