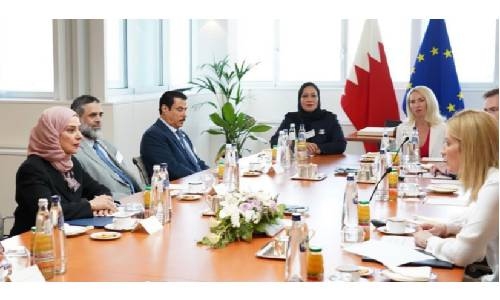 Bahrain yesterday expressed its “dissatisfaction” over the mishandling of Human Rights matters in the Kingdom by the European Parliament during a high-level parliamentary meeting.

“Reconsider the stances and decisions that failed to follow objective methods,” Speaker of the Council of Representatives, Fawzia bint Abdulla Zainal, told President of the European Parliament, Roberta Metsola.

During the meeting at the EP headquarters, the Speaker also urged to reconsider information obtained from unknown parties and that do not reflect the reality of the country. Speaker affirmed that relations between friendly parliaments do not develop unless employed the correct means and legitimate channels to obtain information.

“The Kingdom is witnessing steady progress in human rights,” Zainal told Metsola, pointing out that all EP’s delegates who visited the Kingdom in the past are informed closely about the reality. In this regard, she called for accelerating the pace of parliamentary communications and presented an initiative to launch a new phase of cooperation by opening direct and continuous channels.

Fawzia bint Abdulla Zainal, the Speaker of the Arab Inter-Parliamentary Union, further requested to exempt Bahraini nationals from the Schengen visa. The Speaker also invited the EP President to the Kingdom in the coming period to sign memoranda of understanding, agree on joint work agendas and learn about Bahrain’s landmark achievements under HM the King’s comprehensive development march.

Speaker Zainal and EP President also discussed the progress in youth support and women issues and shed light on initiatives to achieve gender balance requirements in all aspects of national development.

EP President, Roberta Metsola, said that she would visit the Kingdom in the coming period based on the invitation, affirming that the European Parliament would study the request regarding the exemption of Bahrainis from the Schengen visa.

She added that the EP is well-informed about Bahrain’s positive developments, commending the progress made by Bahraini women and their success in reaching influential leading positions.