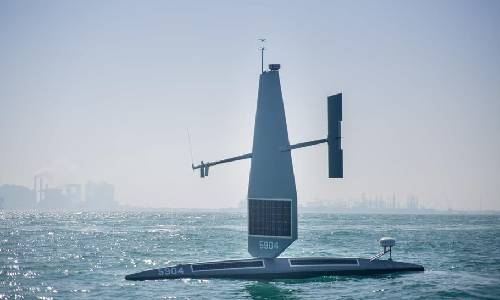 The deployment of a robotic, 23-foot-long vessel Saildrone, which resembles a torpedo with a 15-foot-tall shark fin in the Kingdom, had been in the reports of US Navy’s Stars and Stripes. Powered by wind and solar panels, it has cameras and sensors to keep watch and the ability to sift through data to figure out what’s important, the report said.

These unmanned ships, the report had said, can help the fleet patrol the busy waters of the Middle East, a pathway for much of the world’s shipping as well as for pirates, smugglers and militias armed with drones of their own.

The task force tested the Saildrones last fall in the Gulf of Aqaba, next to Jordan and east of the Sinai Peninsula. Their 360-degree cameras send imagery back to sailors and sensors can scan cargo ships to see if they’re properly registered, said Lt. Jay Faylo, who leads the group’s artificial intelligence efforts.

The ship AI sort the data and alerts humans only when it notices something important, Faylo said. Most of the 100 unmanned surface vessels, Stars and Stripes quoting Navy Capt. Michael Brasseur, the commodore of Task Force 59, said, are expected to be on the water by next summer and will be shared with US partners in the region, who are very interested in the technology.