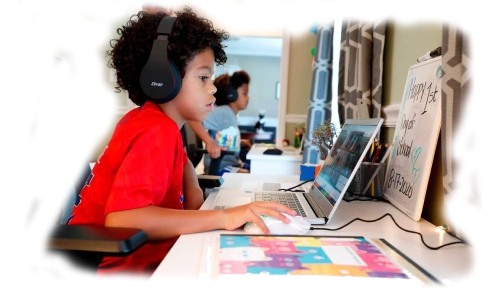 At 8.15 am every weekday, Bahrain resident Aji Thomas’ nine-year-old son opens his laptop and signs in to Zoom to start the school day.

For the next five hours, he is not supposed to switch off the camera and is only offered a recess time of ten minutes.

Along with 45 classmates attending online classes, he is not allowed to eat or drink while on camera nor is he allowed to wear any dress other than uniform with the usual tie around the neck.

“ It is really painful to watch my son struggling before the laptop,” Thomas told The Daily Tribune.

“But there are not many options left.

I want my son to attend offline classes.

Since school buses are not running, there is hardly anything I can do.”

Even the children are facing similar health scenarios after being subjected to online classes for over one-and-a-half years now.

“Parents must ensure that their children are having their eyes protected amid this increasingly continuing online classes,” said Dr Manoj Kurian Philip, Consultant Ophthalmologist at American Mission Hospital.

“Every child attending online classes must follow the 20-20- 20 rule; every 20 minutes spent using a screen; the child should turn his eyes at something that is 20 feet away for a total of 20 seconds.

And this would make their eyes relaxed.

But I don’t know whether any parent is making their children regularly exercise this rule.”

Dr Manoj said that children can also use blue filter glasses to protect their eyes while attending online classes for longer hours.

“Increased screen time during the pandemic season is causing myopia progression among many children and the number of cases has been increasing.

Both school authorities and parents must encourage outdoor activities intermittently to secure the eye health of children.”

Recent studies have also shown an increase in the cases of squint eyes among school children after the excessive use of digital screens.

Speaking to The Daily Tribune, K Gopinath Menon, The New Indian School Bahrain Principal said school managements always opt for offline classes but there is no other option left in the existing scenario.

“Online classes are not by choice. It is something the pandemic situation has imposed on us.”

Gopinath said the teachers are aware of the struggle students are facing after being made to sit before the screens for longer hours.

“We give frequent breaks to students of lower classes.

But for higher classes, we have limitations to offering frequent breaks as it would disrupt the momentum of classes.

“There are many students who switch off the screens after breaks.

So, frequent breaks don’t seem like the right solution to the suffering students face now, especially when we talk from a teacher’s perspective.

We are offering breaks after two periods (one hour and 20 minutes) as per the generally established standards.”

The principal said he expected the number of students attending offline classes to rise.

“But unfortunately the number of students attending offline classes has remained stagnant between eight and 10 per cent.

And I don’t think it will improve in the near time as we see pandemic numbers increasing every day.”