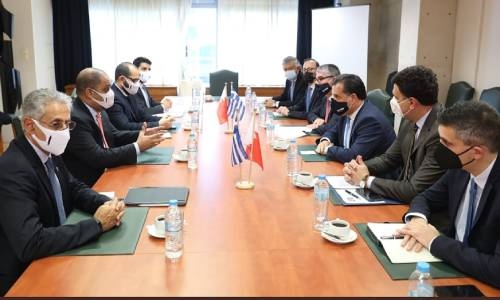 The minister highlighted the importance of strengthening partnerships and widening the horizons of financial and economic cooperation.

“This should be in a way that meets the visions and aspirations of His Majesty King Hamad bin Isa Al Khalifa and the efforts of the government, led by His Royal Highness Prince Salman bin Hamad Al Khalifa, the Crown Prince and Prime Minister,” the minister said.

The minister said this during a meeting held yesterday in the Greek capital, Athens, with Greek Minister of Development and Investments, Adonis Georgiadis, Minister of Tourism, Vasilis Kikilias, and other officials..

Al Zayani participated in the meeting with Youth and Sports Affairs Minister, Ayman bin Tawfiq Al-Moayyad, Chief Executive Officer of the Economic Development Board (EDB), Khalid Humaidan, and the Undersecretary for Research and Projects at the Prime Minister’s Office, Hamad Yacoub Al-Mahmeed.

Members of the official delegation affirmed the importance of visits aimed at enhancing financial cooperation and developing investments between Bahrain and Greece.