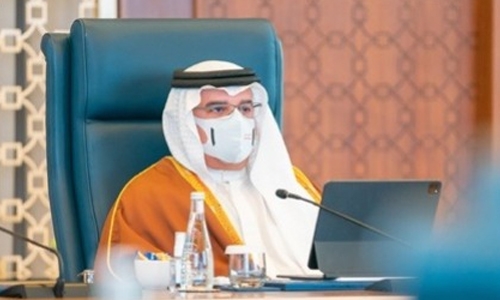 Bahrain is committed to continuing the implementation of the Kingdom’s development projects to achieve the aspirations of citizens in line with the priorities and programmes of the Economic Recovery Plan.

It was discussed during the Cabinet’s weekly meeting held yesterday at Gudaibiya Palace and chaired by His Royal Highness Prince Salman bin Hamad Al Khalifa, the Crown Prince and Prime Minister.

The Cabinet noted the discussion that took place with the Council of Representative’s Financial and Economic Affairs Committee, and authorised the Deputy Prime Minister and Chairman of the Ministerial Committee for Financial and Economic Affairs and Fiscal Balance, Shaikh Khalid bin Abdulla Al Khalifa, to take appropriate measures regarding a draft law with regards to amending some provisions related to social insurance and support for low-income families.

It congratulated Saudi Arabia for successfully hosting an important and eventful international race and praised the efforts of Bahraini motorsport personnel in supporting their Saudi Arabian counterparts in organising this significant global sporting event.

The Cabinet noted the launch of the Muharraq Grand Park under the patronage of HRH the Crown Prince and Prime Minister.

In recognition of International Anti-Corruption Day, the Cabinet emphasised the importance of strengthening oversight and the adoption of initiatives to consolidate transparency and accountability across government workstreams, and achieve the Kingdom’s development goals.

The Cabinet expressed its thanks to the Ministry of Interior for its efforts in combatting corruption.